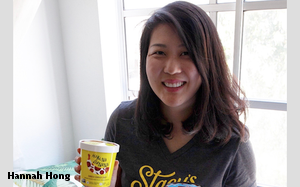 Earlier this month, Hannah Hong of Hakuna Brands was chosen from 400 women who competed for the $100,000 grand prize in the inaugural Stacy’s Rise Project. Named for Stacy Madison, the founder of Stacy’s Pita Chips (now part of Frito-Lay), the program was created to support and encourage female entrepreneurs in the food and beverage industry.

Hong and her friend Mollie Cha, both of whom are lactose-intolerant, co-founded Hakuna late in 2016 after lots of at-home testing that started with banana ice cream. Their company now sells multiple flavors of vegan, non-GMO, plant-based ice cream in a variety of formats—including pints, novelty bars and soft serve, in addition to operating a soft-serve shop located in Hawaii.

CPG FYI spoke with Hong and asked her to share some insights on startup funding, product development, strategy and retail distribution.

CPG FYI: How did you and Mollie get started?

Hong: We were roommates at UC Berkeley and then both went into financial services. We went to different business schools, and I ended up at the innovation division of Campbell Soup Co. About a year later, there was an opening on our team so I put in a referral for her, and Mollie got the job.

CPG FYI: Where did the idea for Hakuna come from?

Hong: Mollie had been making banana ice cream for a few years by putting frozen bananas into a food processor so that it whipped up to the texture of soft-serve.

She made it for me one day and it was like lightning striking. I was like, “this is an incredible idea. Like, we should make this.” So I pretty much immediately quit my job.

Hakuna is from the phrase "Hakuna Matata," which means roughly "no worries" in Swahili. [Editor's note: As anybody who's seen "The Lion King" should know!]

CPG FYI: Did you do any fund-raising at the outset?

Hong: No. I’m all about stage-gating investments, meaning setting up milestones to achieve before moving to the next phase. I used my home kitchen to experiment so we could get to a scoopable texture before we started investing any money into it.

We still do that to be able to know we’re on the right track and we’re ready for the next level of investment. But in the very beginning, we just used our savings.

CPG FYI: How did you approach the challenge of gaining retail distribution?

Hong: We always wanted to go wholesalers to retailers. We knew the path to get there was to start small and build our reputation and brand equity with small, independent stores.

CPG FYI: What advice would you give to startups given the intense competition for shelf space?

Hong: Start small. At first we did the food festival circuit as well as independent grocers. A lot of demos and sampling so we could interact with our consumers and get direct feedback. That way, we could determine the points of difference that our product had.

As you get bigger, it’s capitalizing on the points of difference that really resonate with your consumers. That’s probably the best way to fight for shelf space with your buyer.

We also partner with ecommerce grocer Mylk Guys, which ships groceries across the country.

CPG FYI: Before you got the grand prize, you were chosen as one of five finalists in the Stacy’s Rise Project, and awarded $20,000 plus three months of mentoring with executives at PepsiCo and Frito-Lay. What was that like?

Hong: My mentors were incredible. They were so experienced and really cut down to the meat of the question of my strategy. All of your communication, your packaging, your product development should stem from your strategy.

So even if the consumer doesn’t know what your strategy is word for word, they feel it. My mentors really pushed me to craft and recraft my strategy and make sure it was well articulated and validated.

Hong: All the other founders in the competition were incredibly inspiring, so I’m just very grateful that they picked me. I think it’s incredible that Pepsico and Frito-Lay put this program on and so many people volunteered their time, on top of their day jobs, to help with mentorship and guidance. It’s honestly remarkable to me.