Netflix Holiday Sitcom As Bad As Anything Seen Elsewhere 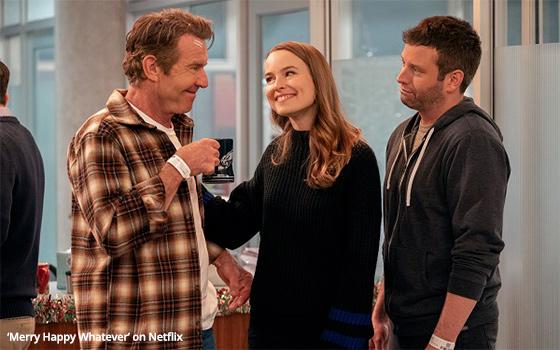 A new Netflix sitcom with a main character named Emmy is not likely to win one anytime soon.

But that is beside the point. What this comedy series really seems to indicate is that Netflix is not content with only providing provocative (and often critically acclaimed) scripted TV series, made-for-Netflix movies and documentaries that cannot be found on conventional TV such as the broadcast networks.

However, this new sitcom -- titled “Merry Happy Whatever” -- is so much like an ordinary network situation-comedy (and a bad one, at that) that you almost wonder while watching it whether Netflix had intentionally set out to make a spoof of a network sitcom.

Or even more interestingly, it is reasonable to ask whether Netflix is now purposely going after network audiences by making the kinds of shows that network TV produces.

Except for the fact that as a Netflix show, “Merry Happy Whatever” runs commercial-free, it is for all intents and purposes a regular network sitcom. It is an extended-family comedy with an obnoxious, stubborn patriarch played by Dennis Quaid (pictured, above left).

I would be willing to apply the tired cliché “gruff but lovable” to a description of the Quaid character, but he is not lovable, and “gruff” does not really encompass the totality of this guy’s odious personality.

The show has his grown children (one of whom is the aforementioned Emmy) and their spouses (or significant others) scared to death of him. When they gather frequently in the family home (supposedly somewhere in Philadelphia), they all walk on eggshells lest they say or do anything to offend dad.

The temperamental, stubborn older dad (or father-in-law) has been done to death on TV. And here, the character begs the same question: If this man is so unlikable, and so dysfunctionally involved in the lives of his frightened grown offspring, then why hasn't anyone yet told him to eff off, or at the very least, demand that he stop being a jerk?

The Quaid character makes the show as unlikable as his character. It's a dud, and would have been a dud no matter where it was airing -- whether Netflix or a network such as CBS, where it would not have felt out of place. The show even has a retro, network-style laugh track that reacts uproariously to almost every line of dialogue.

Netflix no doubt would like to be everything to all people -- even to the point of producing the kind of dreck that gets canceled after two episodes on the regular networks.

For Netflix, it is also likely true that producing a miss every once in a while amidst its many hits will do it no real harm. In the TV business as in life, nobody's perfect.

“Merry Happy Whatever” starts on Netflix on Thanksgiving (Thursday, Nov. 28).

netflix, streaming, television
1 comment about "Netflix Holiday Sitcom As Bad As Anything Seen Elsewhere".
Check to receive email when comments are posted.
Next story loading