Earth, We Have A Problem: One Word -- Plastics 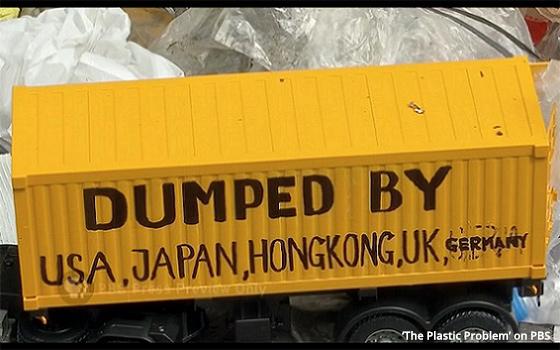 In the “PBS NewsHour” special report called “The Plastic Problem,” premiering Wednesday night, a typical, earnest little girl is interviewed about the dangers of plastic waste to both humans and wildlife.

The girl, 6, has learned about the plastic emergency gripping the planet from her mother, who is seen on the show describing how she has turned her entire household into a (nearly) plastics-free home -- except for at least one item that goes unmentioned: The red tiara the little girl is wearing on her head that is apparently made of plastic.

In the show, the girl is not challenged to discard the tiara. It just goes unnoticed by either the correspondent interviewing her or her mother.

But maybe it can serve inadvertently as a symbol for one of the central issues in the apparent plastics crisis: Most of us can agree there is too much of it. But we also know subconsciously or otherwise that it is in almost everything we own and use.

As this one-hour report points out, plastic is so prevalent that most of us probably cannot name all of the things in our homes in which plastic plays a part.

If we could, the list would probably include just about everything. What then would we get rid of? We do love our plastic tiaras, don't we?

The plastic problem is certainly a big issue. How big? This PBS “NewsHour” -- hosted, anchored and at least partially reported by Amna Nawaz -- applies the kinds of metaphors that we have become accustomed to in shows like this.

“Nine billion metric tons of plastic have been produced since 1950,” Nawaz tells us at one point. “That's the weight equivalent of 27,000 Empire State Buildings, or more than a billion elephants!”

As one who cannot conceive of a billion elephants, much less their weight, these kinds of comparisons go right over my head.

But I get it: Tons of plastic are being used once every day and getting tossed, after which this non-biodegradable material ends up at the bottom of our oceans and Great Lakes, in the stomachs of fish, birds and other animals (some of which we eat), and washed up in great quantities on beaches from Lake Ontario to Easter Island, according to this show.

The pictures tell the story better than the 27,000 Empire State Building metaphors. This show is at least in part a compilation of material gleaned from “NewsHour” reports on plastic that were aired over the past year from a number of far-flung locations.

These include Lake Ontario and Easter Island, mentioned above, and locations in Canada and Asia (including Malaysia).

The image from the show above shows a shipping container on which someone has written graffiti protesting the fact that much of the world's plastic waste is produced in developed countries and then shipped to underdeveloped countries where disposal is careless at best.

If there is an overriding, Big Picture point to this hourlong show, it is that plastic has permeated the global ecosystem to such an extent that we humans are inevitably ingesting it when we eat and drink.

This consequence is not examined in great detail or depth in the show -- likely due to time constraints -- but the point is made: We humans, along with a lot of other living things, are drowning in plastic.

cause-related, environment, news, television
2 comments about "Earth, We Have A Problem: One Word -- Plastics".
Check to receive email when comments are posted.
Read more comments >
Next story loading