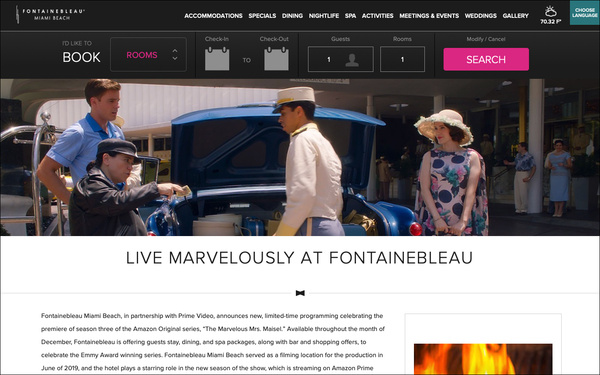 Season three opens in 1959, with Midge and her irascible manager Susie, a role that nabbed an Emmy for actress Alex Borstein, on tour.

It is a safe bet that fashion-conscious Midge would appreciate the classy amenities.

To promote season three, two hotels and a dental and nail brand have offered “Marvelous” flourishes. Specifically, these brands have teamed with Amazon Prime to create show-specific upscale accoutrements. All are limited editions:

*TWA Hotel, billed as the only “on-airport hotel at JFK,” is offering complimentary “Marvelous” wine and a limited-edition carry-on cocktail kit from Nov. 25-27. Travelers at JFK can visit the TWA Hotel, which offers 512 mid-century modern rooms, the “Marvelous” period, close to JetBlue’s T5 terminal. A 1958 Lockheed Constellation has been transformed into a cocktail lounge. The kit contains essentials to create two top-shelf drinks.

*The Fontainebleau Miami Beach, the 20-acre oceanfront hotel, opened in 1954, so it’s no surprise it has a starring role in the new season. (Its architecture is so fabulous it was named a UNESCO World Heritage site in 1981.) For December, the hotel is promoting “Marvelous”-themed options, including dining, bar and spa packages. The Marvelous Stay Package includes a “marvelous” gift kit with special featured items, a “Maisel”-themed dinner for two at Vida and a bottle of sparkling rosé in-room.

This isn't the first brand tie-in with the show.

In July, Revlon created three-tube lipstick kits: "Take the Stage Reds" and two "Stand-Up Nudes." The brands were inspired by Revlon's Fire & Ice ad campaign, which debuted mid-20th century, a time when makeup was seen as a tool of female self-expression. Just look at Midge's choice of red.