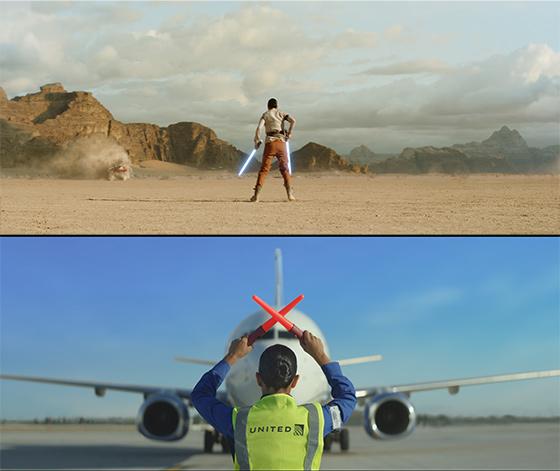 The creative, from mcgarrybowen, supports a tie with the airline and the new "Star Wars: The Rise of the Skywalker" film. It features one of United’s real-life female ramp employees (also known as a “wing walker”), Channon Dade.

The spot opens on Dade doing her real-life job and then segues to a dream-like sequence where she is using light sabers to direct one jet from the Star Wars fleet.

To further strengthen the link between the film and United, the spot is directed by Victoria Mahoney, second unit director of "Star Wars: Rise of Skywalker."

"When I learned United Airlines upholds an amazing mandate to hire true life United employees in their commercials, I jumped for joy and found myself endlessly inspired watching each homemade audition by women, who happen to be as rare in their job of Wing Walker as I am in my job," says Mahoney.

"Ever grateful Disney and Lucasfilm put my name in the hat. It was great fun building the pitch with Kerstin Emhoff at Prettybird and I've waited YEARS to collaborate with DP/Autumn Arkapaw. This spot is a wonderfully playful nod to a specific portion of [film director J.J. Abrams’] vision in ‘The Rise of Skywalker.’"

The 30-second spot will play nationwide during the week of Thanksgiving and will run through January. Supporting campaign elements include OOH going up across the country in prominent spots and airport terminals, on taxi toppers, at New York’s Penn Station, in Times Square, as well as digital and social media.