'The Moodys' On Fox: This Is What Christmas Is All About 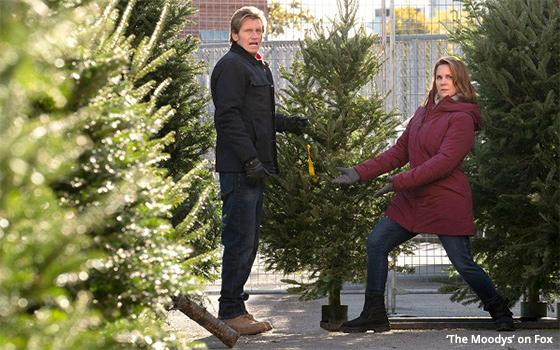 A new limited comedy series premiering this week on Fox represents a decidedly uncheerful take on the holiday season.

But at the same time, this show -- titled “The Moodys” -- deserves applause for its honesty, and for its attempt to portray Christmas as it really is -- a holiday of high expectations that are seldom realized in reality.

TV is a major culprit when it comes to Christmas fantasies. Numerous specials fill the TV hours from Thanksgiving through New Year's with baking and decorating competitions, wholesome TV movies, Christmas music and, endlessly, commercials depicting the joy of gift-giving.

Talk about Christmas fantasies and raising one's expectations: Has anyone anywhere in the world ever actually received a Lexus with a huge ribbon tied around it as a Christmas present? Well, no one that I know.

“The Moodys” stars Denis Leary and Elizabeth Perkins (pictured above) as middle-class older parents in a Chicago suburb whose grown children will all be home for the holidays (one of them -- played by Jay Baruchel -- still lives at home anyway).

Mom has fantasies of Christmas past. She is planning various holiday events such as an evening trimming the Christmas tree while eating Christmas cookies and drinking mulled cider. But the grown kids have other plans. Check the tree-trimming fantasy off the list.

Anyone who has ever gone home for the holidays, particularly in adulthood, will find much to identify with here. And certainly, this theme -- in which hoped-for Christmas fantasies go awry amid all kinds of slapstick misunderstandings -- has been done almost to death before, particularly in movies.

In “The Moodys,” the misunderstandings stem from the half-truths the family members tell each other and the secrets they keep to themselves.

However, unlike the Christmas-tree toppling disasters that occur in madcap holiday movies, the situations in “The Moodys” are kept comparatively small. This makes them more real, and even heartbreaking.

With Denis Leary as the show's star, you are supposed to regard the show initially as a comedy. This is no knock on the show, but to me, this show did not play as a comedy, even if some of the situations are lighthearted.

In fact, I cannot remember a holiday-themed show or special on TV that has ever come this close to depicting the reality of family life at Christmas time.

In the span of this show’s first hour, I went from disliking it at the outset, to wanting to watch more of it by the time it was over. If “The Moodys” takes some getting used to, then it is not unlike the occasional trip home.