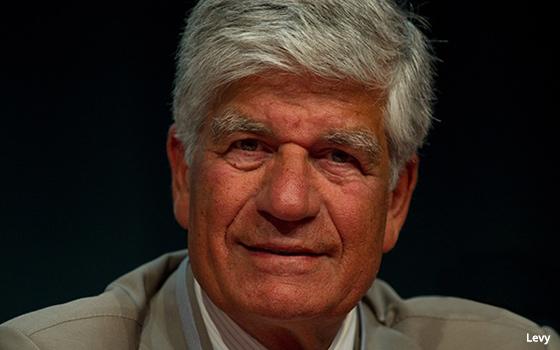 Following Maurice Levy's appointment as Interim Chief Marketing Officer and Chief Communications Officer at WeWork, the former Publicis Groupe CEO and current chairman of the Groupe's supervisory board chatted with MediaPost about his role to reinvigorate the struggling workspace solutions provider.

"I am the cheapest CMO because I am working for free," he says. His tenure is expected to be short-lived, "months or weeks," as his role is to collaborate closely with WeWork's leadership team to reframe the company's positioning more in line with its origins..

"If I had one word to say, it would be 'back to basics,'" says Lévy. The company grew too many side operations, such as WeGrow, that distracted WeWork from its co-working space core. His task now is to design marketing and communications plans that focus on the "incredible" product WeWork delivers and its leadership in the co-working space. "We want to get back to the essence of WeWork," he says. "The quality is there."

He already has received "a lot" of emails about potential permanent CMOs and plans to spend this weekend reviewing these resumes. Although the executive leadership team, with Levy's input, will ultimately make the final decision, he clearly has strong influence over the next hire. The high level of interest shows that the company remains a highly valued solutions provider in its field, he says.

Having launched the annual Viva Tech summit in France, Lévy is well-versed in entrepreneurs and the start-up economy.

In the case of WeWork, he received a call from chairman Marcelo Claure shortly after company founder Adam Neuman was fired from his CEO duties and left the board in early October. Lévy says Claure asked him to formulate a turnaround strategy in early October, which he presented on Oct. 12. He gave a "little idea" about the recovery of the brand, which Claure "immediately approved" but added Levy's strategy could only be executed if he signed on as interim CMO and CCO.

Levy's pro-bono-like compensation is to avoid any conflicts of interest because as part of his restructuring plan, he recommended the company hire Publicis as its agency partner. Both Lévy and Claure addressed a town hall meeting last Friday to outline the new strategy. Everyone at WeWork is committed and encouraging, he says.

Lévy is able to balance his other duties as chairman of the Groupe's supervisory board because, as the saying goes, when one does what they love it doesn't seem like work. It might even be fate as, coincidentally, WeWork now controls Publicis' old office in NYC's Herald Square. "I was surprised in a good way they have our building," he says.

He remains actively involved with Publicis Groupe, including handling "clients when needed." When it comes to Publicis these days, Lévy's "ambition is for [current CEO] Arthur [Sadoun] to consider me his 'best assistant.'"