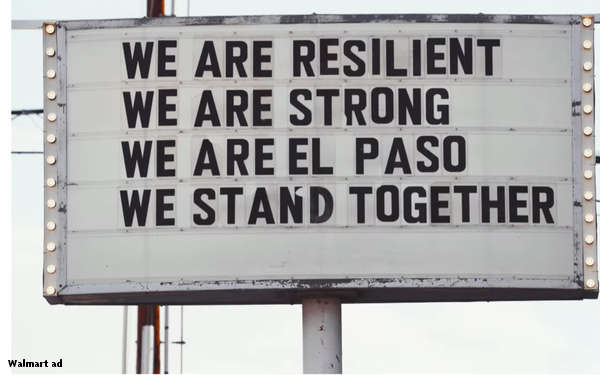 Retailers raced into Thanksgiving weekend with marketing engines at full throttle. Walmart is hoping to win shoppers over with an emotional new ad campaign. And Target is shaking up its promotional cadence, rolling out Cyber Monday deals a day ahead of schedule.

Much of Walmart’s holiday marketing so far has focused on its traditional deal-finding, low-price positioning.

But the new campaign, called "Spark," goes for a more emotional connection. The Bentonville, Arkansas-based retailer says it wants the ads to reach beyond the usual “Hey thanks, associates” approach it’s used in past year-end efforts. Instead, it focuses on disaster relief, welcoming immigrants and supporting communities. That includes El Paso, Texas, still struggling in the aftermath of this year’s store shooting that left 24 people dead and 22 wounded.

“We’re showing the world not just what we do, but what we stand for, which in this case, is championing people who make their communities better,” writes Janey Whiteside, executive vice president and Walmart chief customer officer, in a blog post introducing the new effort.

The ad broke during an NFL game on Thanksgiving Day.

“On the heels of Black Friday weekend, we’re kicking off Cyber Week a day early to give guests an opportunity to continue shopping and saving on doorbusters from the comfort of their own homes,” says Rick Gomez, executive vice president and chief marketing and digital officer, in its announcement.

The Minneapolis-based company, which has doubled the number of seasonal employees this year, is putting max effort into digital fulfillment. That includes same-day services like Order Pickup and Drive Up, with many items available in an hour. Customers can also get same-day home delivery with Shipt.