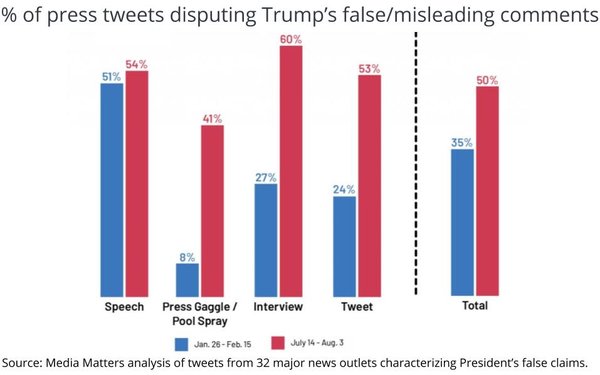 Major U.S. news outlets are doing a better job of fact-checking and debunking false claims made by the president during public and press events, interviews and tweets, according to an analysis released this morning by watchdog Media Matters.

The analysis, a follow up done six months earlier, shows a marked improvement in the vigilance of 32 news organizations tracked during each period: Jan. 28 to Feb. 15 vs. July 14 to Aug. 3.

The analysis is based on tweets made in the official Twitter feeds of each of the news outlets,

The analysis shows that the news outlets disputed the President's false or misleading claims 50% of the time in the most recent period, an improvement of 35% from earlier in the year.

"Media Matters has tracked numerous discrete instances in which individual news outlets’ Twitter feeds failed to rebut Trump’s misinformation, from his false claims about his environmental record to his lies about the Ukraine abuse of power scandal," said the study's author, Matt Gertz of Media Matters. "But our results show that, on balance, the passive spreading of Trump’s misinformation by news outlets’ Twitter feeds has declined since our first study -- albeit with substantial room for additional growth."