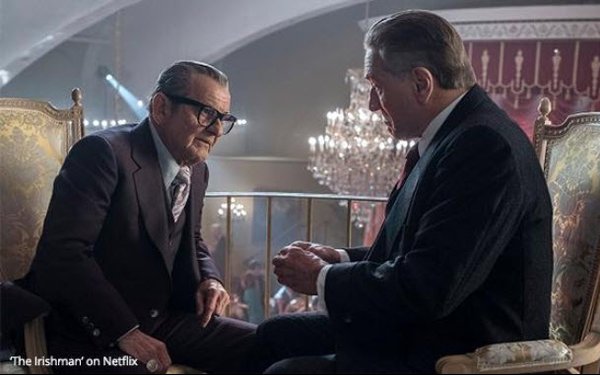 Netflix’s pricey ($159 million) gamble on the star-studded, three-and-a-half-hour movie “The Irishman” appears to be paying off, at least in terms of initial streaming viewership.

In its first five days on the streaming service, the movie generated an average minute audience of nearly 13.2 million U.S. viewers, and a reach of more than 17.1 million unique U.S. viewers, according to Nielsen’s Subscription Video On Demand Content Ratings.

By comparison, among other recent releases tracked by Nielsen, only “Bird Box” has had a higher first-five-days average minute audience, at 16.9 million.

“The Irishman” — which brings together Al Pacino, Robert DeNiro, Joe Pesci, Harvey Keitel, Ray Romano, Bobby Cannavale and Anna Paquin, among others — was released on Netflix on Thanksgiving eve (November 27), after playing in a some traditional movie cinemas for four weeks starting on November 1.

Other Nielsen stats thus far for the film:

* It had an average minute audience of nearly 2.6 million U.S. viewers on its first day on Netflix, and 3.1 million on its third day (November 29).