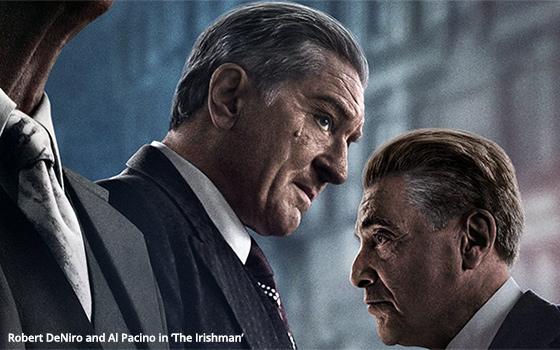 The movie took in 2.6 million persons two years and older on the first day of streaming. On the third day of the five-day period, the movie tallied its best numbers -- 3.1 million.

“Irishman” was released on the Netflix subscription video on demand platform on November 27, and earlier in a limited theatrical release in November 1.

While the movie’s results were big, Netflix’s “Bird Box” movie, of December a year ago, did better -- taking in 16.9 million through five days. Its more recent “El Camino,” in October of this year, came in at 8.2 million after five days.

In terms of rough comparisons with other highly viewed TV-based programming, CBS’ “NCIS” took in 14.6 million viewers during a seven-day period (Nielsen L7, live program-plus-seven days of time-shifted viewing) in the previous week. CBS’s “FBI” came in at 12.2 million viewers and NBC’s “This Is Us” had 11.9 million.

The biggest audience group to see “The Irishman” was men ages 50-64 -- amounting to 20% of its overall viewing audience on its premiere day. Over the five-day period, Nielsen says this slipped to 15%, with the movie attracting more younger viewers.

Netflix began to heavily promote the movie starting in late October for its streaming/theatrical run.

To date, iSpot.tv says some 40 airings of TV commercials have run, totaling some $8.2 million in national/regional TV spend.