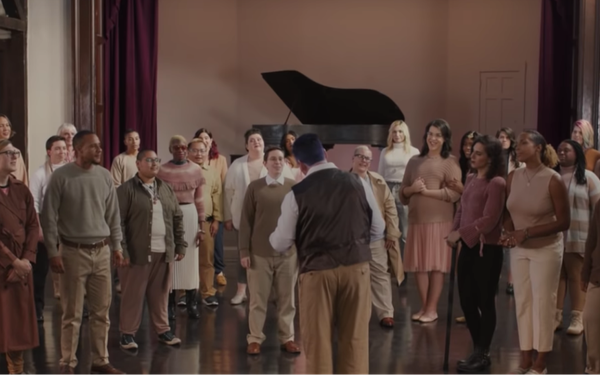 Pantene knows that for the LGBTQ community, going home for the holidays can be complicated.

So the Procter & Gamble shampoo brand teamed up with GLAAD and the Trans Chorus of Los Angeles, who perform a sweet version of “I’ll be Home for Christmas” while dramatizing the challenges of showing up as you truly are.

Themed “Going Home for the Holidays,” these videos use the #BEAUTIFULGBTQ hashtag.

They're based on estimates that 44% of LGBTQ people feel like they can’t go home to family as their authentic selves.

While many brands have focused on messages of inclusivity, Pantene has been more aggressive. Earlier this year, it relaunched “Don’t Hate Me Because I’m Beautiful,” completely reimagining its 1980s classic as a way to address bias and celebrate personal expression.

“'Going Home for the Holidays’ sheds light on a universal experience felt amongst the LGBTQ+ community: the personal heartache of not being able to share their truest identity with family and friends, even at this special time of the year,” says Ilaria Resta, vice president for P&G’s North America hair care division. “We are honored to be stewards of the LGBTQ+ community and to help tell their important and transformational stories.”

Those stories are increasingly finding their way into TV, as well. GLAAD recently released its annual report on the television industry, reporting a record-high percentage of LGBTQ series regulars on broadcast television, at 10.2%.

The report also finds that the racial diversity of LGBTQ characters on both broadcast and cable shows increased significantly. And for the first time, the report found that the number of LGBTQ regular and recurring women on broadcast outnumber LGBTQ men.

The advocacy group is asking the TV industry to step up its representation even further. It’s asking that 20% of characters on regular series be LGBTQ by 2025, and that half of those LGBTQ characters be people of color.