It's The Most 'Just OK' Time Of The Year! AT&T Holiday Parody Ads Celebrate Disappointment 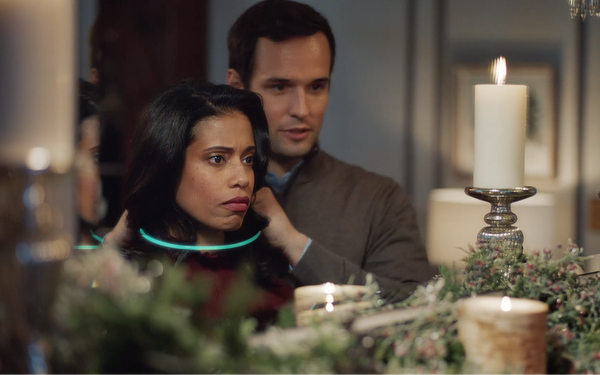 AT&T is building on its one-year-old  “Just OK Is Not OK” series of commercials with a batch of holiday-themed ads where the payoff to the gift-getter is profound disappointment.

When hubby approaches his wife with a jewelry box gift, we should know what’s coming next. Instead, in AT&T’s version, when she opens it up, she finds neon necklaces.

As he fastens the lime green one around her neck, the husband says, romantically, “Don’t ever let the liquid touch your skin.”

This definitely isn’t a commercial that ends with the tag, “Every kiss begins with Kay.”

The others ad warp the surprise-car-gift cliche (in this one the excited wife runs out the door to find... a brand-new snowblower) and the airplane ad with the visitor from faraway who arrives with a special gift for an adoring little girl (an inflatable neck pillow).

“Just OK Gifts Are Not OK,” reads the ads as they conclude, with more advice that “Great Gifts Are On America’s Best Network.”

The AT&T gifts, as exhibited on its website, are the more-or-less routine deals on iPhones, earbuds, soundbars and Google Minis. So it seems, at best AT&T is doing its thing for holiday cheer by providing a little cynical holiday sneer, a kindly expressed “Bah, humbug!” toward treacly holiday commercials.

“We really had to commit to these genres for the punchline to land,” says Andrew Lavery, creative director for Critical Mass, which, along with BBDO LA, made the ads.  “These spots needed to immediately feel familiar and authentic to all the car, jewelry and airline holiday ads we’ve seen without giving anything away until the last minute.”

He adds,  “Then we had a little fun crushing people’s holiday spirits with thoughtless and overwhelmingly just OK gifts -- because just OK is not OK, whether it’s holiday gifts or wireless networks.”

The AT&T ads are running now on digital platforms, where parodies are eminently more shareable than TV commercials that make another entry into the happy holiday commercial bag.