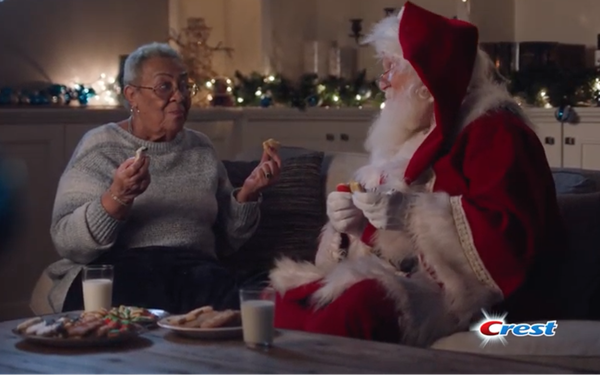 Procter & Gamble’s Crest brand is fulfilling one senior’s wish as part of its holiday effort.

Working with Wish of a Lifetime, a nonprofit organization that grants wishes for seniors across the country, Crest fulfilled Bertha Nunn’s lifelong dream to star in a national commercial.

Her TV spot with Santa debuted during "NCIS" on CBS, her favorite TV show. and will continue to run during the holidays.

Nunn is an 86-year-old former corrections officer and teacher’s assistant from Waldorf, Maryland. She always wanted to be an actress in TV commercials, "but as a busy mom of two and grandmother of six grandsons, she never had the opportunity to pursue her dream," according to Crest.

Besides the 20-second TV spot from Publicis, the brand released a 3:20 video chronicling the story, "Bertha’s Journey."

The video shows her being given a special Crest robe to wear prior to getting styled for the spot, as producers reviewed the commercial’s storyboard with her.

The spot shows her enjoying cookies with Santa on the night before Christmas. When Santa points out that people are usually asleep when he comes for his annual visit, Nunn tells him that she’s a night owl.

“When we heard about Bertha's wish to become an actress, we wanted to make it happen,” said Carlos De Jesus, vice president of North America Oral Care, in a release. “We met her and she just lit up the room. She made everybody smile, brought tons of energy and we saw how magical she could be on camera, so we wanted to share that magic with everyone.”