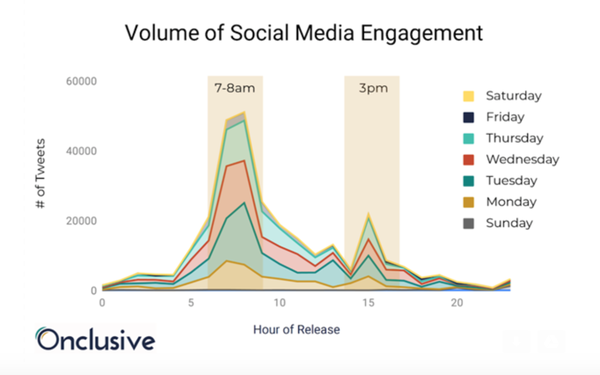 The timing of a news release can dramatically affect the number of syndicates (a direct copy of the news release shared in another venue) and articles written by journalists, according to research.

Data science company Onclusive analyzed 15,000 anonymized Business Wire news releases over the last few months in what it claims is the first study to try to determine factors that affect their performance.

The most popular time for PR teams to post their news releases targeting journalists is Tuesday at 8 a.m. Eastern, which has 10 times the press release volume of the average hour for the rest of the week.

Many investor relations releases go out around 3 p.m. Eastern on Wednesdays, but there are also big pushes at 7 a.m. and 8 a.m. early in the week. This could reflect whether companies are trying to move the market with their results or trying to avoid that movement.

The most popular days and times to release news may not actually be the most effective at driving results, says Sean O'Neal, president of Onclusive.

“Marketing and communications teams have fallen into certain routines, but these practices have never been validated one way or another,” O’Neal tells Marketing Daily.

"The data actually suggest that, because release activity is so heavily concentrated in these narrow windows, your news may get lost in the crowd. In contrast, by timing your releases based on these new and possibly counterintuitive findings, you may gain an advantage in increased editorial coverage and social media amplification.”

The average number of follow-up stories per release is 10. Earned media articles reached into the hundreds for big companies with big news items, like Apple launching a new iPhone.

Assuming the release is newsworthy, the best days to put out it to generate follow-on articles are Tuesdays and Fridays. Tuesday is the better day for general releases, and Fridays appears to work best for stories that are less about hard news, perhaps because journalists have more time at the end of the week or over the weekend to consider such items.

Using multimedia assets in the release boosted social media amplification by an average of 12%.