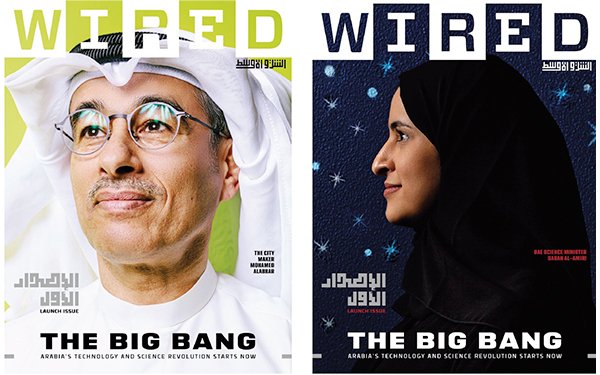 has published its debut print issue for the Middle East. It will be available on newsstands in the Gulf Cooperation Council, consisting of the six Gulf monarchy nations, and the wider Middle East.

Wired launched a bilingual website for the Middle East earlier this year.

The print edition of Wired Middle East will be published quarterly. It is the tech and culture magazine's fifth international edition. (Wired is published in Italy, Japan, South Korea, the U.K. and U.S.)

The Middle East edition is published under a license agreement with Nervora, which publishes another Condé Nast brand, Vogue Arabia, as well as PopSugar Middle East. Nervora is headquartered in Dubai.

Al-Amiri is the UAE’s minister of state for advanced sciences and the deputy project manager for the Emirates Mars Mission probe. She was appointed to her position at 30.

Alabbar is behind the world’s tallest building, the Burj Khalifa, and the world’s largest mall, The Dubai Mall. Noon.com, an ecommerce giant in the region, is backed with $1 billion.

The Middle East region "consists of a young, tech savvy population, with 60% of people under the age of 30,” according to a release from Condé Nast.

Shashi Menon, founder-CEO of Nervora and publisher of WiredMiddle East, said the launch of the print edition "heralds a new golden era of science and technology in the region."

Menon added: "With the historic transformation taking place across the Middle East, there’s never been a more important time for the authoritative voice of Wired to come to the market and chronicle and elevate these stories to a global stage."

Per the publisher, India is home to the greatest number of Quartz readers outside of the United States.

India-based experts from different sectors have been added to Quartz Pros, the brand's community of contributors. They now include Mahindra Group chairman Anand Mahindra, Infosys cofounder Kris Gopalakrishnan and broadcast journalist Barkha Dutt, among others.

With the new design, QZ.com and the apps will automatically detect where readers are and present the most relevant edition, global, India or UK.

The editions mix regional and local news with Quartz’s global reporting. Readers will also be able to switch between editions.