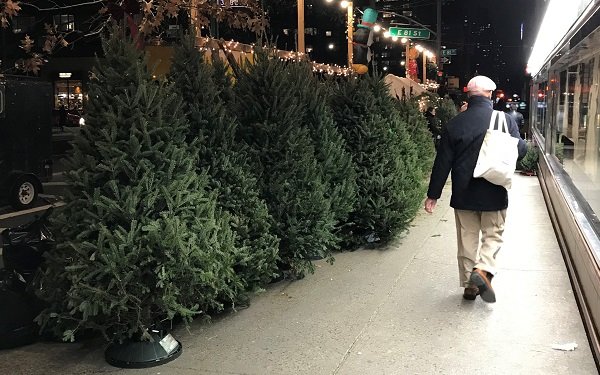 Sometimes the practice of journalism can be aided greatly by the use of one’s own eyes.

This not-so-difficult-to-understand concept came to mind earlier this month when New York City TV stations aired reports on their local newscasts in which Christmas tree sellers were seen almost unanimously claiming a shortage of Christmas trees this season.

And yet, any New Yorker possessing the gift of eyesight would be hard-pressed to believe this claim. This year, as in every past year they can remember, city residents cannot help noticing that the iconic Christmas tree stands of Manhattan are everywhere (including the typical tree stand in the photo above on Manhattan’s Upper East Side).

They are a welcome sign of the season -- festive and fragrant. And there are dozens upon dozens of them. Here on Dec. 19 (the day this TV Blog is being written) -- less than a week until Christmas -- they are still fully stocked.

Mind you, they are selling trees. But this year, as in past years, experience (i.e., seeing with one’s own eyes) will likely show that the tree stands that have popped up throughout our New York neighborhood (and all other neighborhoods too) will still have plenty of trees right up to and including Christmas Eve.

The TV Blog knows this from personal experience. Late on Christmas Eve is when these nomadic, seasonal tree sellers pack up and leave.

And since they do not relish carrying their leftover trees away (when they are useless to them anyway), they sell them for almost nothing or even given them away. We were once handed a free tree by one of them on a Christmas Eve not that long ago.

And yet, somehow, our not-so-intrepid local TV reporters seem to lack the requisite journalistic skepticism, based on the obvious plenitude of trees for sale all over town, to question the claims of tree sellers when they insist there is a tree shortage. It just does not add up.

The impetus for this TV Blog was a round of tree-shortage news stories a few weeks ago that resulted evidently from a tip that seemed to have reached every newsroom in town at around the same time. The story was that at least one sidewalk Christmas tree seller in Manhattan was asking $6,500 for a 20-foot Frasier fir.

This is the kind of story the TV news media loves. It’s seasonal, it comes with plenty of Christmas-y B-roll video of Christmas trees standing three or four layers deep on display on New York City’s sidewalks, and it has that high-price factor -- something that plays well both here in New York and, even more so, out in the great hinterlands (otherwise known as everywhere else).

“Can you believe what they’re asking for Christmas trees in New York City this holiday season?” incredulous local news anchors undoubtedly asked their viewers in markets big and small across the country. “Our New York sister station has the story.”

In the stories, interviews were conducted with various tree sellers in New York City, including the man in Soho who was pricing his 20-foot Frasier firs at $6,500 and also claiming that the price was not an issue for his well-heeled buyers.

Among other things, the point was made that a 20-foot Christmas tree was not a common Christmas tree for a typical household in New York City, where the majority of ceilings would not accommodate such a monster.

So this tree seller pointed out that the high price was due in part to the costs and difficulties of bringing a relatively small number of trees of this size into Manhattan. That rings true.

But when he and other tree sellers talked blithely in all of the stories about a supposed shortage of trees this year, it defied belief. It was never questioned in any of the stories, either by the reporter on the street or the anchors in the studio.

Many of these people live in the same New York neighborhoods the rest of us do. And yet, they all swallowed this tree-shortage claim, despite the evidence standing right before their eyes and practically on their own doorsteps.

But that is the state of TV news today (if not news in general). It might not be fake in all cases, but it does seem incomplete. “Fake news” is a popular phrase today. Maybe “lazy news” is more accurate.