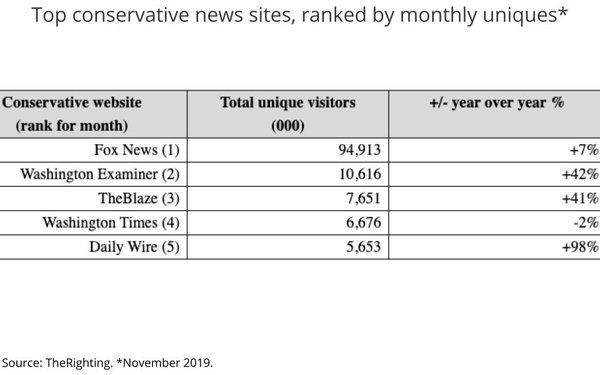 While Fox News remains the most dominant source of right-wing news coverage, several up-and-comers have been ascending -- as least in terms of digital unique user gains, according to a year-end analysis of Comscore data released today by TheRighting.

The Washington Examiner rose 42% in November 2019, making it the 11th straight month of traffic increases. The Examiner remained the second most-trafficked conservative website according to TheRighting’s analysis, trailing only perennial leader Foxnews.com. TheBlaze ranked third for the month.

“It’s surprising to see the declines in the major mainstream media websites when there was so much significant news generated from the impeachment hearings in November,” TheRighting Founder and President Howard Polskin states, adding: “However, the two leading conservative websites – Foxnews.com and the Washington Examiner – seemed to benefit from the hearings. Their audiences did not appear to experience any impeachment fatigue as evidenced by their strong year-over-year gains in unique visitors.”

Leaders and Laggards Among Top 20 Conservative Websites for November 2019

(by unique visitor percentage increase/decrease from year ago)