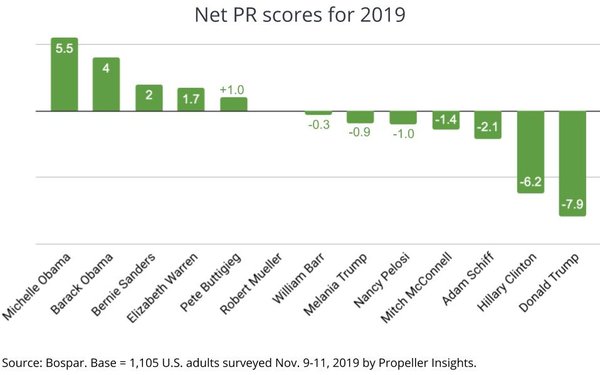 The old adage goes that the press can say whatever they want so long as you spell my name right, but public relations researchers know there is a net positive and/or negative effect at the end of all those media impressions. Based on a survey of American consumers conducted by PR firm Bospar at the end of 2019, the biggest net gain of the major American political figures was former First Lady Michelle Obama, followed closely by her husband, former President Barack Obama.

The net scores are the difference between those indicating each subject had the "best" or "worst" PR year in 2019.

Special Counsel Robert Mueller was net even, and the rest of the pack -- including a mix of Republicans and Democrats -- were net negative, PR-wise.

The biggest loser, not surprisingly, was the current President, though his 2016 political challenger -- Hillary Clinton -- wasn't far behind.

What's the net of this net? If you ask me, it should be that Michelle Obama is the Democratic nominee for 2020, even though she has said she's not running. Believe me, I know. I think I was the first to report that while live blogging her interview when she told Queen Latifah at SXSW in March 2016.

As unlikely is it seems, maybe she'll change her mind?

In any case, here are the explicit positive / negative PR scores for each of the above: