Twitter on Monday expanded the availability of its “Promoted Trend Spotlight” takeover ad product. Spotlight combines the power of video with Twitter’s Explore tab, which is a collection of trending topics and hashtags.

Twitter is now making the product generally available in the United States, the United Kingdom and Japan, and expanding it to 12 additional markets, including Canada, Mexico and India.

Designed as a complement to Twitter’s Promoted Trend takeover product, Promoted Trend Spotlight supports six-second videos and GIFs, as well as static images. On the unit, ad creative displays on mobile and desktop, and run edge-to-edge on mobile.

Ads appear at the top of users’ Explore tabs for the first two visits per person, per day. After the initial two visits, the placement moves to the standard Promoted Trend placement, and organic editorial content resurfaces in the Spotlight placement.

This resulted in higher ad recall rates, along with greater brand consideration, and a lift in stated likelihood to use a brand in the future, EyeSee found.

In addition, according to internal Twitter data, users were three times more likely to click through an ad in the Spotlight unit than the standard Promoted Trend. 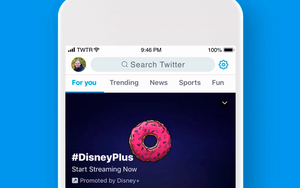