Study: 50% Of Publishers Double Down On Subscriptions In 2020 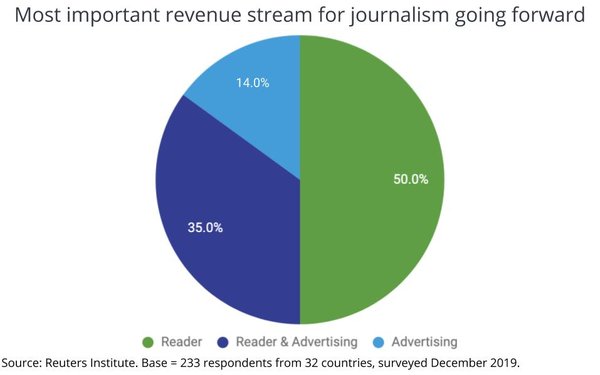 A new report from the Reuters Institute for the Study of Journalism found 50% of publishers continue to bet strongly on reader revenue. Half of the study’s respondents said it will be their main revenue stream going forward.

The annual “Journalism, Media, and Technology Trends and Predictions 2020” report is based on a survey of over 230 CEOs, managing directors, editors and heads of digital from 32 different countries.

Around one-third (35%) of publishers surveyed think both advertising and reader revenue will be equally important going forward.
One in seven (14%) thinks advertising alone will be the most important stream of revenue.

Nic Newman, senior research associate at the Reuters Institute for the Study of Journalism, wrote in the summary of the report: “The next decade will be defined by increasing regulation of the internet and attempts to re-establish trust in journalism and a closer connection with audiences. It will also be rocked by the next wave of technological disruption from AI-driven automation, big data, and new visual and voice-based interfaces."

He continued: "All this against a backdrop of economic and political uncertainty which will throw up further challenges to the sustainability of many news organizations.”

Collecting first-party data will become a key focus for publishers this year, according to the report. More websites will require readers to register in order to access content.

This is in response to “reduced cookie support from leading browsers and tightening privacy regulations" in Europe and the United States, Newman wrote.

Over half of publisher respondents said podcast initiatives would be important to them in 2020.

The study also suggests news organizations will use AI to personalize front pages and “pursue other forms of automated recommendation this year.” A majority of the report’s respondents (52%) say these AI-driven initiatives will be very important this year, to target potential subscribers and optimize paywalls (47%).
advertising, data, journalism, publishing, subscriptions, trends
Next story loading