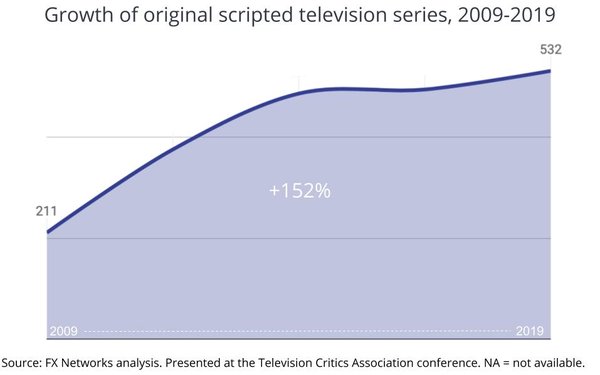 Ten years ago, former TVBlog columnist Ed Martin shared a startling statistic with me that, in retrospect, may have been the tipping point for the attention economy.

Ed had just returned from the Television Critics Association conference and told me FX Networks shared some research indicating there were more original scripted series being produce than person had time to watch.

Ten years later, FX revealed new data at last week’s TCA conference showing that the supply of original scripted series has grown 152% since it first benchmarked it in 2009.

The finding is important because that kind of content has always represented a “premium” on Madison Avenue, what we might have called “prime-time” in the old days, regardless of what daypart it aired in.

FX Networks has been putting a positive spin on the stat, calling it its “Peak TV” analysis, but the truth is we are long past a peak supply of media and the future of the attention economy will be based on “pique” media, or media capable of piquing a consumer’s interest in a world where consumer’s are oversaturated with options to choose from.

It’s a very different world than the original ad model evolved in, which was one based on “borrowing interest” by advertising in a scarce supply of premium content.

And it requires all parties working together to pique people’s interest.