Insurgent Republican On Running For President 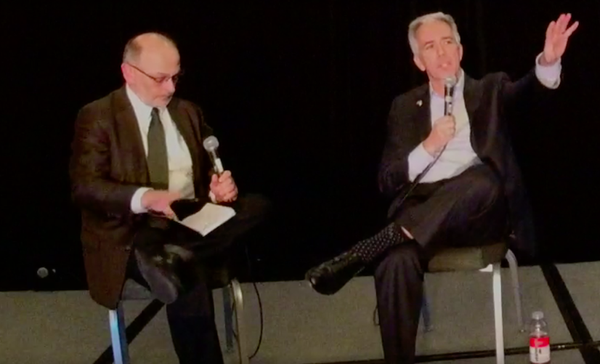 Was that a primal scream?

There he was, talking about his forthcoming book with MediaPost's Joe Mandese when the shouting began. "Donald Trump has canceled primary elections in 10 states! That's bullshit! Millions are not going to be able to vote for president this year. Listen, I'm a lifelong Republican. I went to Republican headquarters this morning, nobody would meet with me. Aaarrrggghhhh!!!!"

That's what it's like to be running against this president, Joe Walsh, right, told our Marketing Politics conference in Washington, D.C. "Maybe most of my messaging right now appeals to independents and Democrats. My party is not a party anymore. It's a cult. Before Trump, you were defined by where you stood on the issues."

Walsh, a former Illinois congressman and radio host, is waging an insurgency campaign. He is not without his own set of drawbacks. "I went to Congress in 2010, part of the Tea Party class. Sometimes I'd go over my skis and I'd get personal and say offensive things. This is like a redemption tour. I apologized for my role in putting Trump in office. I'm a reformed outlaw. He's still an outlaw."

Walsh and his team are looking for "a little bit of magic. Like what Pete Buttigieg did," he said. In fact, as Mandese showed him, he ranks on the Republican side between where Buttigieg and Yang do on the Democratic side.

Since announcing at the end of August, the campaign hasn't turned down any medium. "I'm addicted to Twitter," said Walsh. "We put out a lot of videos. It's the message ... this is a unique time in American politics. There's a bit of a yearning to have somebody on our side out there pounding him every day.

"Mainstream and the left media are talking about me more than conservative media ... [because] we are united in what I'm doing. With ... all the bad stuff that he does every day, who knows politically what life's gonna look like in three months."

The goal now, he said, is to surprise people with a "pretty good number in Iowa." After New Hampshire, "we go dark  because Donald Trump canceled primaries."

Next week, the campaign is putting out an official podcast, speaking directly to voters in the Hawkeye State.

The book that comes out in mid-February is called, appropriately, Fuck Silence. "The point of the book," said Walsh, is that he's a threat. I'd rather have a socialist in the White House than a dictator."