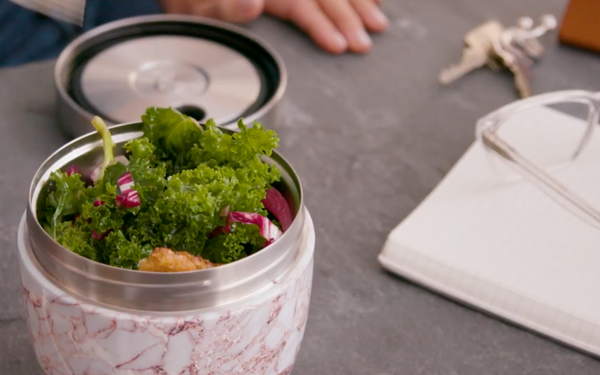 S’well, looking to continue its expansion past swanky water bottles, says its first-ever ad campaign is also a way to deepen its commitment to sustainability.

The 10-year-old company, launched when founder Sarah Kauss decided that water bottles that combined fashion with function would tempt people to kick their plastic-bottle habit, began branching out into food-storage solutions last year. And it just introduced its first-ever global campaign, with ads running in Chicago, London, New York, Toronto and Washington D.C., using digital, radio and out-of-home. Ads are from Mrs & Mr.

It designed every aspect of the campaign to further sell customers on S’well’s mission, says CMO Josh Dean. For example, 93% of the campaign’s printing and production in the U.S. is either recycled, or the company will upcycle it after the effort ends in March. “We tried to be really mindful about every step of this campaign,” he tells Marketing: D2C Weekly. “We’re not in any taxis, for example. We want people to use public transportation.”

Dean won’t say what percentage of the company’s sales are through direct channels, and it has wide retail distribution, in stores as diverse as Bloomingdale’s, Nordstrom, Kohl’s and Dick’s Sporting Goods. It's also got plenty of competition, including Yeti.

The company is targeting a group Dean calls “stressed-out style seekers.” Between 25 and 50, “they are very interested in stylish, well-designed and functional products,” he says. And they like to be among the first in their group to make new discoveries.

He says he hopes the campaign will boost brand awareness and traffic, and get people talking about S’well.

“People love their bottles, and are drawn to the design. When we ask them how they feel when they leave their bottle at home, it’s like they lost their dog for the day.”

And while the company prides itself on superior performance, Dean insists purpose is the big differentiator. While all such bottles help reduce plastic use, S’well partners with different charities to make a bigger impact.

Several years ago, for example, it passed out 320,000 free water bottles in New York City, giving one to every single high-school student in a public or charter school. And since 2017, it’s committed $1.6 million to support UNICEF water programs in Madagascar.