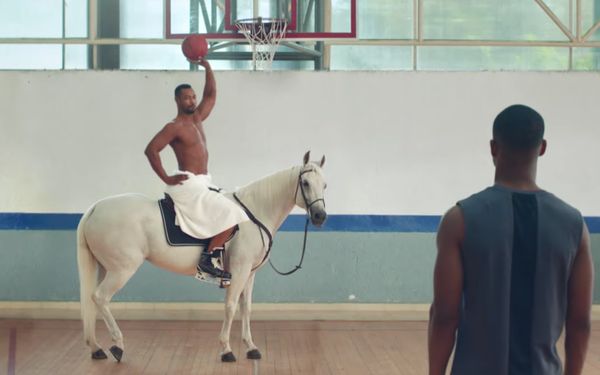 But Procter & Gamble hopes the reboot -- "Smell like your own man, man,” from Wieden + Kennedy -- will win it new customers, even as it provides some nostalgic yuks for older viewers.

“We have been around 80 years, but that campaign was a real turning point for Old Spice,” says Matt Krehbiel, associate brand director, “driving a conversation for the first time between men and women about grooming products.”

And while the category has changed dramatically in the last decade, he says the return of Isaiah Mustafa -- sometimes on a horse and sometimes a dolphin -- with TV son Keith Powers will appeal to the teenagers it’s trying to reach today. (Really, what Gen Z-er doesn’t dread a towel-clad dad log-rolling into his office or ice-skating onto the basketball court?)

Powers, who is low-key and understated, proves a mighty contrast to Mustafa, who is as over-the-top as ever -- which underscores how differently younger men view grooming products, Krehbiel tells Marketing Daily.

Old Spice may continue to be the No.1 selling antiperspirant and deodorant brand for men in the U.S., but men are flocking to names like Harry’s, Dollar Shave Club, Dove and Nivea, as well as specialty brands. And some -- including P&G sibling Gillette -- are winning them over with ad messages that earnestly probe the definition of masculinity.

“We’re finding men are much more open to new steps within their grooming routine,”  Krehbiel says, “including lotions and facial cleansers. He has more concerns about his hair.” A growing number of Old Spice customers -- about 5% -- aren’t even men.

The ads are running on TV, including “Good Morning America” and Sports Center, as well as in digital and social channels. And Mustafa, along with his horse, is scheduled to make an appearance some time during the Super Bowl.

P&G says the first campaign was one of the first viral brand sensations, generating millions of views. It won an Emmy and the Grand Prix at the 2010 Cannes Lions International Advertising Festival.