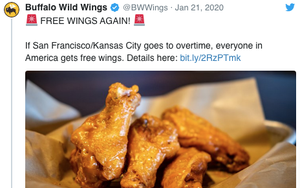 It’s been a while since the last chicken sandwich melee, so why not wage war with wings?

For Applebee’s and Hooters, it’s a conflict designed to drive Super Bowl Sunday revenue and traffic, while Buffalo Wild Wings is hedging its bet with a possible giveaway that won’t happen until Feb. 17.

BWW was the first out of the coop on Jan. 21, with the news that it will provide “free wings for America” if the Super Bowl goes into overtime on Feb. 2. The catch was that the chain’s free-wings offering wouldn’t take place until two weeks after the game.

This wasn’t lost on Hooters, which on Jan. 24 pecked back publicly by offering “instant gratification” in the form of six free wings to diners who are on premises when and if the Super Bowl goes into overtime.

“No need to set a calendar reminder. No need to leave work early,” Hooters announced in a reference to BWW’s 4 p.m. to 7 p.m. window on Feb. 17 for its possible wings handout.

Also on Jan. 24, Applebee’s announced it will be parting with “up to 1.6 million” boneless wings regardless of who wins the Super Bowl. It will give 40 boneless wings to patrons who order at least $40 worth of food — for delivery only — on game day.