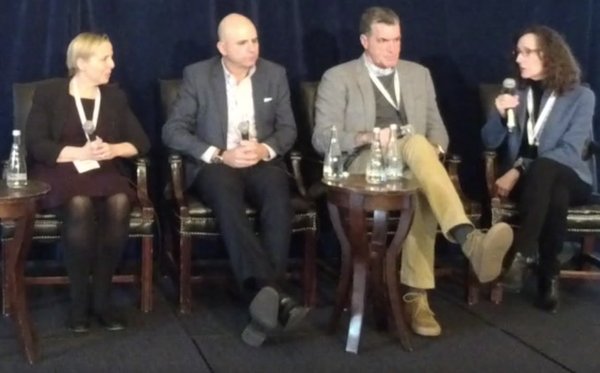 Media buyers are always on the hunt for quality video, especially as linear TV viewing continues to decline. So where are they finding it as well as quality audiences?

An example of the difficulty involved was given by the father of two young boys. Matt Sweeney, chief investment officer (CIO) at GroupM (second from right), said he and his wife asked their kids for a list of things they hoped Santa Claus would bring at Christmas. "I did not recognize one toy that they described," he said. "They're watching Netflix and YouTube. They're not seeing TV ads. When I was a kid, all I saw was TV ads." So the family went to Target, where they took photos of the things the kids wanted and "sent" them to Santa.

Sweeney spoke on a panel at our Forecast 2020 conference on Wednesday in New York.

Catherine Warburton, CIO at Assembly (far right), said that, anymore, "almost everything is addressable. There are no huge tent pole events. Relevance has changed. It's hard to have one rallying point."

The CIO at UM, Jon Stimmel (second from left), said they are "going big into Hulu" because of the safe content there. And they're working with Roku, which is a scalable environment. They have found Twitch is a place where young people are spending a lot of time.

Young consumers are also into live programming, said Shelby Saville, CIO at Spark Foundry (far left), citing Twitch and ESPN Live. "Live is a new area that has not been explored," she said. "The younger consumer is used to tapping into something live. It will be at scale soon. I find it super interesting."

Media today finds a lot of categories "under duress," said Warburton. "There's an upswing of DTC advertisers. The world is more complicated. As ratings decline, clients are looking for quality video beyond the linear screen, which is challenging at scale.

"As duress on supply continues, we will see high increases in this year's upfront. It's nice to talk about flexibility but I predict we'll have the same negotiations as we did a year ago."

"Upfront is more than TV," said Stimmel. "The focus is ... on the appropriate spend for the amount of people that actually consume television. That audience is getting older."

Older or younger, media buyers today walk a tightrope in the divisive political atmosphere that spills over into news. "Brand guys want to stay away," Sweeney bluntly said. But Stimmel said it isn't so much news as opinion they are shying from.

Instead, "they are buying collectively, with no allegiance to a particular side."