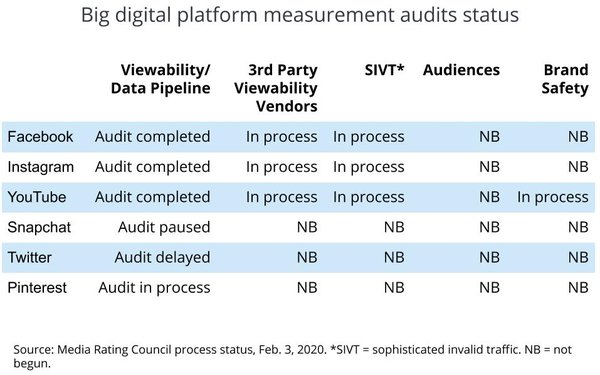 The Media Rating Council this week announced three big digital platforms' measurement services -- Facebook’s, Instagram’s, and YouTube’s -- have completed their engineering audits and that their accreditation is pending an audit of third-party vendors, which are currently being processed.

The MRC also disclosed that two big digital platforms’ measurement services -- Snapchat and Twitter’s -- have been “paused,” and “delayed,” respectively, while Pinterest’s audit currently is being processed.

The MRC said the third parties being audited for both Facebook and Instagram include DoubleVerify, Integral Ad Science and Moat.

And for YouTube, they include DoubleVerify and Integral Ad Science.

No time frames were disclosed for completing those audits.

The MRC said Twitter has completed its “pre-audit,” but its actual audit has been delayed until it completes a “systems upgrade project.”

The MRC said Snapchat actually completed its audit, but that the project was paused “at Snapchat’s request” while it makes “platform changes that will affect audited metrics.”