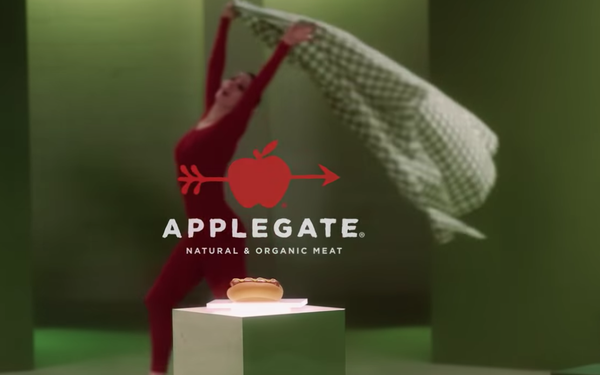 Founded in 1987 and since 2015 a standalone unit of Hormel Foods, Applegate calls its new initiative “Go Applegatarian”—a nod to the rise of various “tarian” eating ideologies. It’s meant to showcase the company’s heritage of animal- and environment-friendly practices, while promoting the consumption of meat free of additives and artificial ingredients.

In this campaign video, whose ostensible goal is “resetting palates” after Super Bowl bingeing, a woman in exercise tights prances about as the visuals and voiceover address things like “the cleaner wiener,” bacon with no chemical nitrates and “guilt-free pepperoni.”

The campaign is running on Hulu, YouTube TV, Facebook and Instagram, along with audio and digital platforms. It’s the first work from New York agency Terri & Sandy, which landed the Applegate account in late 2019.

“Based on our research, we think there are potentially 51 million conscientious carnivore households in the U.S.,” Nicole Glenn, vice president of brand strategy and innovation at Applegate, tells Marketing Daily.

She adds that more than 95% of people in the United States eat meat, and Applegate is the leading natural and organic meat brand.

While Applegate itself sat out the Super Bowl ad-wise, the Center for Consumer Freedom used the game to up the volume on the battle between traditional meat producers and meat alternatives. The nonprofit organization, which says its support comes from “restaurants, food companies and thousands of individual consumers,” ran a spot depicting a kids’ spelling bee in which the audience is informed that some plant-based products contain methylcellulose, "a chemical laxative that's also used in synthetic meats."

Plant-based food marketer Impossible Foods responded with a statement saying it “will not tolerate Big Beef’s bull” and published its own video, in which a spelling bee moderator explains the word poop: “The stinky brown stuff that comes out of your butt. There’s lots of poop in the places where pigs and cows and chickens are killed and chopped to bits to make meat. And there’s poop in the ground beef we make from cows.”

Last fall, following criticism on social media, Beyond Meat revised some of its website claims about alleged links between processed meats, cancer and heart disease, as reported by CBC/Radio-Canada.