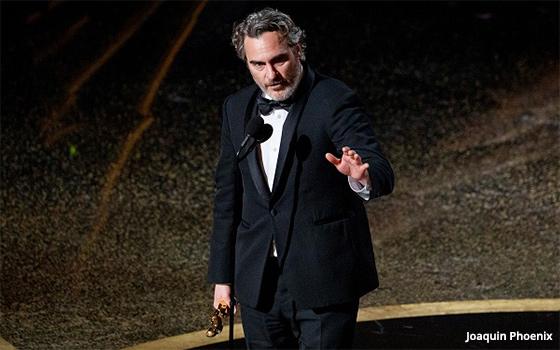 First and foremost, let us be clear here: The TV Blog believes Joaquin Phoenix's acceptance speech was the standout highlight of the Oscars on ABC Sunday night.

The speech rambled far afield -- like free-range livestock, you might say -- eventually landing on the subject of cows, calves and cow's milk.

“The Joker Wasn’t Joking” could have been a headline (and likely was somewhere) on any of the sidebar stories focusing on Phoenix's speech that were part of the subsequent Oscar-story packages produced on news websites and newspaper news pages in the aftermath of the awards.

Phoenix (pictured at the Oscars above) won this year's Best Actor Oscar for the title role in “The Joker.” People already familiar with his work are well-aware of his intensity when it comes to acting, which he apparently takes very seriously as a profession and art form.

He can also be famously ill-at-ease in these kinds of public settings. Many of us still remember an appearance he made on David Letterman's “Late Show” in 2010 in which Phoenix sported long hair, a shaggy beard and dark glasses -- and seemed incoherent.

So, when he went on stage at the Oscars Sunday night, he did not use the opportunity to thank a living soul, but instead delivered a speech about humankind's disconnection to, and exploitation of, the natural world.

Most notably, the passage of his speech about cows and calves will take its place alongside the most memorable Oscar moments in the show’s entire history. Here it is, with some context:

“I think that we've become very disconnected from the natural world, and many of us, what we're guilty of is an egocentric worldview -- the belief that we're the center of the universe,” Phoenix said.

“We go into the natural world, and we plunder it for its resources. We feel entitled to artificially inseminate a cow, and when she gives birth, we steal her baby, even though her cries of anguish are unmistakable. Then we take her milk that is intended for her calf and we put it in our coffee and our cereal, and I think we fear the idea of personal change because we think that we have to sacrifice something to give something up. …”

It is highly likely that in all the years of the Academy Awards (92 of them, to be exact), no one ever raised the subject of the artificial insemination of cows. That topic was so unexpected, and Phoenix was evidently so uncomfortable, that you had the feeling that anything could happen.

This was electrifying, edge-of-your-seat Oscar television. Incredibly, the consensus in the media -- both social and otherwise -- seemed to be that Phoenix's speech was ungracious at best, and at worst, offensive in its eccentricity.

A disgrace? They must be kidding. The TV Blog takes no stand either way on Joaquin Phoenix's bovine advocacy, but compared to the rest of this bloated, boring Oscar show, Phoenix's speech rose like an oasis in the Sahara.

His speech not only aroused millions who were probably already dozing, but if there are still newsrooms out there with editors who prize creativity in headline writing, then this speech presented a goldmine of possibilities.

I thought about it for only a few minutes and came up with these: “Joaquin Phoenix's Moo-vie Moment”: “Phoenix Makes Hay With Cow Speech”; “Oscars To Phoenix: Don't Have A Cow, Man!”; “Oscar Meets Elsie”; “Joaquin's Oscar Cattle Call”; “Udderly Unexpected”; etc., etc., etc.

Here is a thank-you speech I would like to give right now: I would like to thank Joaquin Phoenix for enlivening an awards show that in so many ways was almost unbearable to watch.

Thank you, Joaquin, for being your authentic self, an artist who is not at all comfortable giving speeches, but had the courage to give this one anyway. For what it is worth, you have gained a new, lifelong fan -- me.