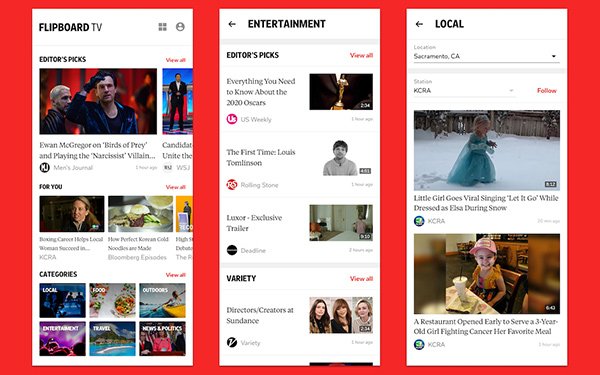 Flipboard is creating a curated, subscription-based video service inside its content aggregation platform.

The new Flipboard TV service is launching next month. It focuses specifically on professionally produced videos by publishers and TV stations that may have been difficult for audiences to discover.

It offers another way for publishers to monetize video content, according to the company. More than 100 publishers and local TV stations will be available at launch. They include The Wall Street Journal, Bloomberg Media, Rolling Stone, Surfer magazineand The Recount.

Flipboard TV will cost $2.99 per month after the free trial and is ad-free.

For the first three months, the service will be available exclusively on the new Samsung Galaxy S20 line of smartphones. “The launch of Flipboard TV builds on years of collaboration with the Samsung team, creating content experiences for each new generation of the Galaxy devices,” stated Mike McCue, Flipboard’s cofounder-CEO.

Flipboard TV will feature videos addressing news, business, politics, entertainment and technology from its publisher partners. Viewers can customize the experience, based on their interests.

The company says the new service “provides a single place where people can watch high-quality videos from a wide range of premium publishers, curated both manually and algorithmically for their interests,” without paywalls or mixed in with user-generated content on social-media platforms.

The Entertainment channel, for example, will feature videos from Variety, Us Weekly and Rolling Stone; while the Business channel will have content from Barron’s, Bloomberg Media, QuickTake by Bloomberg, The Wall Street Journal and MarketWatch.

Daniel Bernard, senior vice president of Barron’s Group, stated: “Video is one of the most engaging content types. Tapping into the potential of this content type, Flipboard TV represents an opportunity to broaden our audience.”

In the coming weeks and months, Flipboard will add more channels and partners, while rolling out the video service to additional devices. Flipboard says users have indicated in surveys they want more video in the app.

Flipboard has roughly 145 million regular users who can create their own magazine-like packages with aggregated content from other sources.

Flipboard TV is available in a new dedicated tab inside the Flipboard app. Users can follow topics, publishers and curated video channels, which appear in a personalized video feed, as well is in their existing “For You” feed.