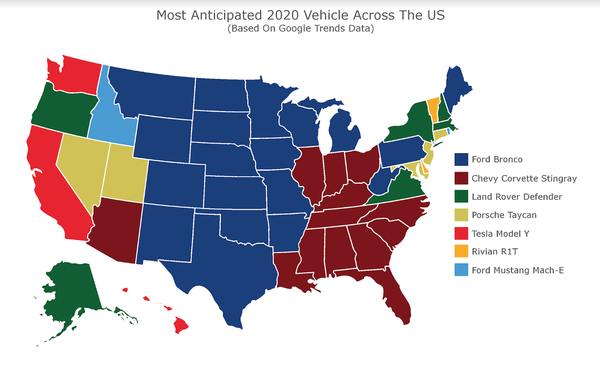 Auto enthusiasts can't wait to get behind the wheel of the Ford Bronco SUV and Chevrolet Corvette Stingray, according to a study by PartCatalog.com.

An evaluation of Google trends data since Jan. 1 looking at searches for upcoming vehicles set to be released this year has the 2020 Ford Bronco as the clear favorite, winning 19 states. This isn't surprising, as buzz over the new Bronco has been going strong for quite some time.

In a close second is the Chevrolet Corvette Stingray, which won 13 states.

The data was compiled by partcatalog.com, a car and truck accessories website based in Austin, Texas, which creates auto-related trend maps every month.

“It's something both our fans love and our staff loves to do it,” says Alan Marek, the owner of PartCatalog. "We started doing them a few months ago when the Cybertruck was announced and have continued to do them, with a different spin each month.”

This year there are a lot of new cars coming out, and a lot of chatter online about all of them, so the company wanted to see how they all stacked up against each other, he says.

“The biggest story here, in our opinion, is that Chevy/Ford still dominates Midwest and southern states,” Marek tells Marketing Daily. “Despite its increasing popularity, chatter on the Model Y mostly remains on the West Coast (in comparison to the other cars).”