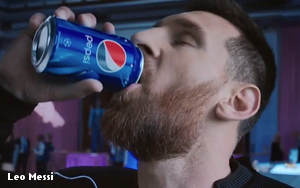 Pepsi today kicked off a global campaign for its partnership with the Union of European Football Associations with a commercial pitting celebrated athletes Paul Pogba, Raheem Sterling, Leo Messi and Mohamed Salah against each other to score a can of Pepsi.

In the commercial, titled “Play Never Stops,” Pogba and Sterling -- who are new to the Pepsi athlete roster -- are seen at a music event vying for the last can of Pepsi with Messi and Salah, while kicking soccer balls amid a mashup of real and imagined physical stunts.

With activation planned for more than 80 countries, the campaign comes on the heels of a strong fiscal 2019 for PepsiCo Beverages North America. PBNA delivered organic revenue growth of 3% -- its best performance since 2015.

Directed by filmmaker and producer Henry Scholfield, the “Play Never Stops” spot features the Latin song “Presidente” sung by Ginette Claudette. It will air in the United States on Univision, TUDN, Galavision, UniMas and Bleacher Report/Turner.

“Our aim was to play with the energy of the ad and to entertain people, rather than show people being entertained,” Natalia Filippociants, vice president of marketing for global beverages at PepsiCo, said in a statement.

The creative agency for the TV commercial is AMV BBDO, with media handled by OMD.

The campaign's limited-edition packaging features Messi, Salah, Pogba and Sterling on cans of Pepsi and Pepsi Black (called Pepsi MAX in certain markets). Via QR codes found on selected cans, consumers can play a game with mini augmented-reality versions of the four athletes, and share scores to Instagram Stories.

While PepsiCo has long benefited from a 50/50 joint venture with Unilever’s Lipton tea brand that dates to 1991, management appears to have ruled out increasing its stake as Unilever conducts a strategic review of its tea business.

Asked during a Feb. 13 conference call with investors why PepsiCo would not seek to acquire Unilever’s half of the joint venture, chairman and CEO Ramon Laguarta said he didn’t think Unilever’s ongoing review would have “substantive ramifications” for PepsiCo going forward.

“We’ve built a nice ready to drink tea business, both in the U.S. and internationally. So we certainly feel good about that. As regards the joint venture, we really like where we sit very much right now,” said Laguarta.

According to The Wall Street Journal, the review of Unilever’s approximately $3.3 billion tea business could lead to an outright sale, part ownership or a different structure.