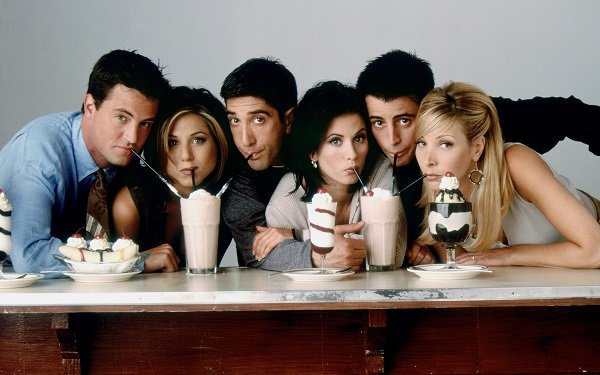 Exhibit A, at least until more such exhibits come along: The announcement on Friday from WarnerMedia that the company has lured all six cast members of “Friends” to reconvene for an unscripted reunion special.

This reunion will evidently be positioned to help hype the launch of WarnerMedia's new subscription streaming service, HBO Max, in May.

Unofficially titled “The One Where They Got Back Together,” this special will serve as an adjunct to the 236 episodes of “Friends” that will be available on the streaming service, said the announcement from WarnerMedia.

It is an incredible thing to contemplate: A video entertainment revolution is underway stemming from a series of technological innovations that have dramatically altered the way video content is distributed and consumed -- and the foundation for this new way of TV life is this old sitcom from a far different era.

And not only the show itself, but this reunion too. This special figures to be a TV throwback if there ever was one. Let's unpack this “unscripted reunion special” project for a moment, starting with the word “unscripted.”

The word's use invites several interpretations. One is that the principals involved, including the six cast members and the show's three original producers, did not really want to be bothered with actually developing and writing a script (i.e., a story of some kind) that they would actually have to memorize, stage, rehearse and then perform.

No doubt they were lured by generous financial packages, and also by what one might describe as “self-interested obligation.” By agreeing to participate in this reunion special (for which all six are getting executive producer credits), they will theoretically help to promote and drive subscriptions for HBO Max, while also promoting the continued vitality and health of their show, from which they have all been enriched for years and years.

Look for this unscripted reunion show to be styled as an off-the-cuff reminiscence talk show in which the six will share loving memories of the show and each other, perhaps accompanied by ample clips from “Friends.”

Perhaps a subsequent announcement will reveal a host/moderator for this conversation. Ellen DeGeneres perhaps? Her daytime talk show is a long-time WarnerMedia staple.

If this is to be the nature of this reunion special, then it will be a throwback indeed. It might be no different from reunion specials of the now-distant past featuring the reunited casts of shows such as “Andy Griffith,” “Designing Women” and “The Nanny,” to name only three of what must have been dozens of these reunions seen on network TV since at least the 1970s.

In that context, the fact that this reunion is going to WarnerMedia’s HBO Max, and not the network that drove the initial popularity of “Friends” in the first place -- NBC -- is itself a sign of modern times.

But of course, NBC never owned “Friends” -- it only rented it. Companies that own the shows can exploit them to their heart’s content. CBS launched its own subscription streaming service with a “Star Trek” spinoff (“Discovery”), followed by a reboot of “Twilight Zone” and then another “Star Trek” spinoff (“Picard”).

For its part, Comcast-owned NBC Universal hardly needs “Friends” or a “Friends” reunion show to get the ball rolling on Peacock, its own subscription streaming service due to launch later this year.

That service will have “The Office,” and if WarnerMedia is launching with a “Friends” reunion, can an “Office” reunion on Peacock be far behind?