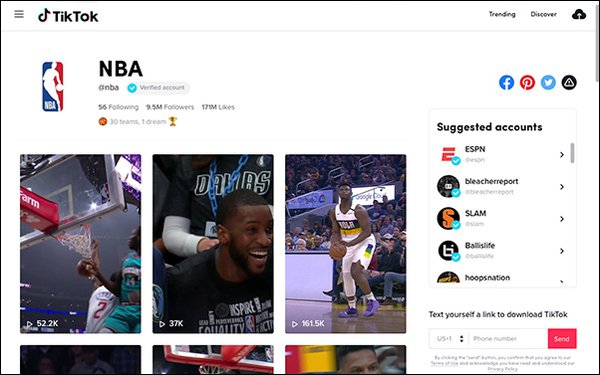 Compared to other brand categories, sports media outlets are shining on TikTok.

That’s according to new research from Conviva, which tracked the TikTok activity of hundreds of brands between January and February of this year.

During that period, the average sports media outlet saw its TikTok following swell by about 400,000 users, the analytics firm found.

Giving the NBA some competition, the Overtime sports network boasts about 6.1 million followers -- 1.2 million of whom came on within the past month.

Regardless of category, the brands experiencing the most success on TikTok are posting quality content on a frequent basis, according to Nick Cicero, vice president, strategy at Conviva.

In fact, when looking at the 20 fastest-growing TikTok accounts between January and February, post volume was a big differentiator (with these accounts posting three videos per day on average).

At this relatively early stage in TikTok’s evolution, brands with the highest follower counts (anything over 1.5 million) come from the worlds of television and sports media.

Nickelodeon is presently the top brand in the television category, which Cicero attributes to its relentless rate of posting.

From January to February, the Viacom unit posted more than 51 videos to TikTok, by Conviva’s count.

With 339,400 new followers, the Kansas City Chiefs led all sports teams with the most followers gained over the past month.

As a league, NFL teams added an average of 283,935 followers, last month, which bested the 280,420 followers added by the average NBA team during the same period.