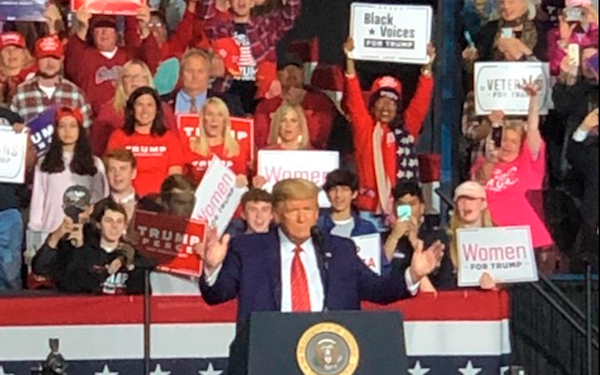 CHARLESTON, SC -- Love him or hate him, Trump is undeniably an entertainer.

But I was surprised attending my first Trump campaign rally here Friday night to learn exactly what form of entertainment he provides: stand-up comedy.

Yes, he was here to rally supporters and remind them about his popularity vs. his Democratic rivals who are competing to win the Palmetto State’s primary today, but mainly he was working the room like a skilled comic, delivering one-liners and improv-ing riffs to entertain, more than turn out any voters.

South Carolina is one of many states that have canceled its Republican primary this year, despite a challenge from former Massachusetts Governor Bill Weld.

But that hasn’t stopped Republicans from voting for Democrats in the state’s open primary, with some explicitly using it to disrupt the Democratic nomination process in what has been dubbed “Operation Chaos.”

Trump leaned into that during Friday night’s performance, encouraging attendees to vote for what he considers his weakest rival candidates.

“I assume this is okay from a campaign finance standpoint,” Trump joked before asking state politicians Lindsey Graham and Tim Scott, seated nearby, to help him avoid “booby traps” because they are experts in this topic.

“Who is best for us?” Trump asked the crowd before launching his own “real poll,” not like “Fox,” which he asserted is the worst pollster.

First he championed the “loser” Tom Steyer who he said is “not that wealthy” and that he “thought I knew all of the wealthy people.”

He then advised the crowd not to “waste your vote on him.”

“Mini Mike” Bloomberg is a “total catastrophe,” Trump continued, adding he “doesn’t have a chance. He has given up.”

“Pocahontas” Elizabeth Warren “isn’t dumb, but she is so damn mean,” Trump chortled, dismissing her chances, saying “we can forget about her.”

Likewise, he said Amy Klobuchar is “not going to happen.”

Both Tulsi Gabbard and former South Bend, Indiana, Mayor Pete Buttigieg were absent from Trump’s real-time rant, er, I mean poll, but he turned his attention to two of his most polarizing rivals.

Attendees loudly booed for both candidates, before Trump proclaimed “Crazy Bernie” as the weaker candidate to battle against him come November.

Trump’s other main talking points focused on his obligatory rants:  the impeachment and Russia. Between chants of “USA, USA, USA!”

Not surprisingly, he also made his case for his first term accomplishments.

To my eye, he appeared to stick to his scripted teleprompter about a third of his speech, deviating to his stand-up schtick most of the time.

He proved skillful at reading when the audience momentum was flagging and working his most popular material, especially his attacks on the “fake news” media outlets.

Trump declared NBC is worse than CNN. NBC’s parent company Comcast spends millions to improve its corporate brand, before adding he plans to do “everything possible to destroy their image.” (Trump recently filed a libel suit against The New York Times for publishing an op-ed opinion column about his ties to Russia.) 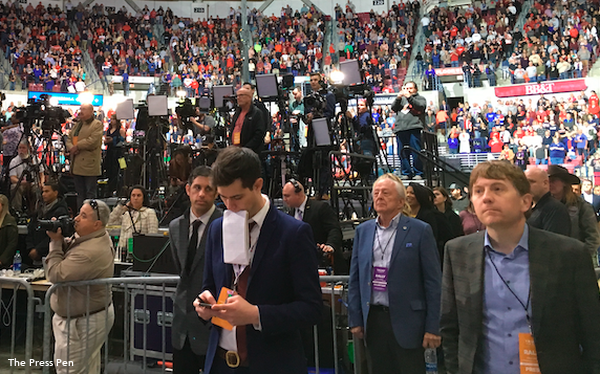 I got to experience first-hand how much disdain journalists are treated with by the President: All members of the press covering the rally were hunted down by campaign staffers and required to return to a “pen” 30 minutes before his appearance.

This, they said, was for our safety, because Trump uses the press as a foil, explicitly egging his audience on with chants of “fake news” and rants against the media. 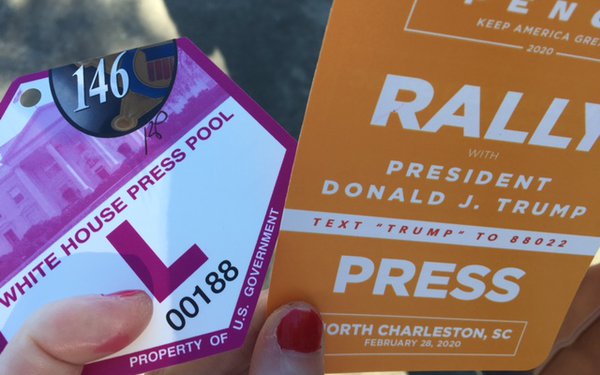