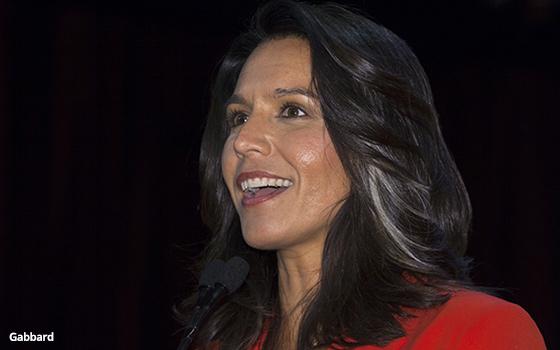 Siding with Google, a federal judge has thrown out Democratic presidential candidate Tulsi Gabbard's free-speech lawsuit against the tech company over a brief suspension of her advertising account.

In a decision issued Wednesday, U.S. District Court Judge Stephen Wilson in the Central District of California ruled that Gabbard, a House member from Hawaii, has no valid claim that Google violated the First Amendment, given that Google is a private company.

“Google is not now, nor (to the Court’s knowledge) has it ever been, an arm of the United States government,” Wilson wrote. He dismissed the complaint with prejudice, meaning that Gabbard can't attempt to reformulate her claims and bring them again.

The decision stems from a lawsuit brought against Google last July by Gabbard's campaign, which alleged that her Google Ads account was suspended for several hours on June 28 -- two days after she participated in a debate with other Democratic hopefuls.

Google argued in court that the lawsuit should be dismissed on the grounds that the company isn't the government, and therefore isn't bound by the First Amendment's prohibition on censoring political speech. The company also said the suspension occurred after its automated anti-fraud systems flagged unusual activity, and not for any political reasons.

Gabbard's campaign attempted to argue that Google should be considered a “state actor” -- meaning equivalent to the government -- and subject to the same First Amendment rules as the government, due to its role in accepting and verifying election ads.

Wilson rejected that argument, writing that Gabbard had not established how Google's control over its platform was equivalent to government regulation.

“Google does not hold primaries, it does not select candidates, and it does not prevent anyone from running for office or voting in elections,” Wilson wrote. “To the extent Google 'regulates' anything, it regulates its own private speech and platform.”

Numerous other judges have dismissed lawsuits accusing tech platforms of violating the First Amendment by “censoring” speech. Most recently, the 9th Circuit Court of Appeals ruled last week that Prager University had no grounds to proceed with a lawsuit accusing Google of censoring conservative clips on YouTube.