New Marketing Aims To Put The Chic Back In Chico's 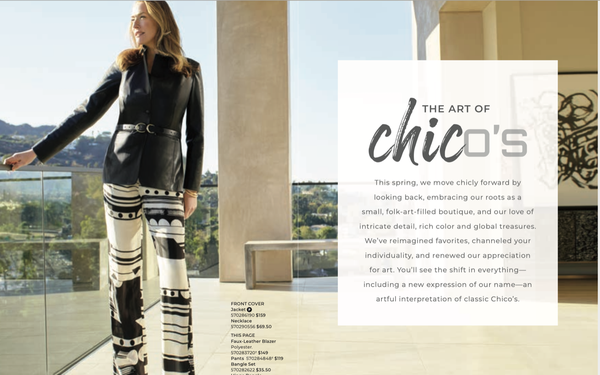 Chico’s, the retailer aimed at women of a certain age, is changing its marketing stripes with a new logo and positioning that it hopes ups its fashion profile.

The new thinking goes back to the company’s origin story as a small boutique on Florida’s Sanibel Island 35 years ago. “It was really more of a small art gallery that sold a little clothing,” says Kimberly Grabel, senior vice president of marketing. “Clothes sold so well that apparel became the focus.”

As time went on, Chico's became known not just for essentials, but “memorable pieces, ones that were truly special and artisanal,”  adds Grabel. Bright colors and prints also helped the retailer stand out.

“We make artwork for her closet, and we want to remind her of that,” Grabel tells Marketing Daily.

Future Brands redesigned the logo with an artful brushstroke emphasizing “Chic,” which Grabel says is an attempt to give it “a more elevated aesthetic” that gets back to those roots.

Chico’s has tied the launch to a new collection that maintains that heritage with “beautifully designed jackets, the thoughtful use of color and statement jewelry made from genuine materials.”

The company recently posted a 2.2% gain in comparable-store sales, with all three brands (it also owns White House Black Market and Soma) showing an improvement. That feat hasn’t happened since 2014. The company also trimmed its losses to $4.3 million, a step up from a loss in the comparable period of $16.6 million.

But it also has the burden of a historically tricky category. On paper, stores catering to older women make perfect sense: Between Gen X and baby boomers, tens of millions feel aged out of most fashion retail. Grabel says the number of women entering that 50-plus zone -- the brand’s sweet spot -- is going to grow by 30% in the next 10 years.

But in reality, brands like Lands’ End and Coldwater Creek have had more ups and downs than most over the years, struggling to find merchandise and marketing that is neither too frumpy or too trendy.

Chico’s has the added baggage of an extra generation. Women just turning 50, its primary target, are actually the daughters of Chico’s current customers. “We need to help them see Chico’s in a different light,” she says. “They think of it as their moms' store.”

Besides the new logo, the company is injecting all marketing materials with a look that’s artier and more like editorial than advertising. Ads have a heavy focus on Facebook and Instagram.

Grabel says there is a tremendous push for new content, with a different theme each month. It then links that theme to a new manicure, a monthly reading list from Simon & Schuster, a cocktail of the month from Diageo and a movie list. “The idea is to bring this sense of artistic chic together, across all of our touchpoints.”