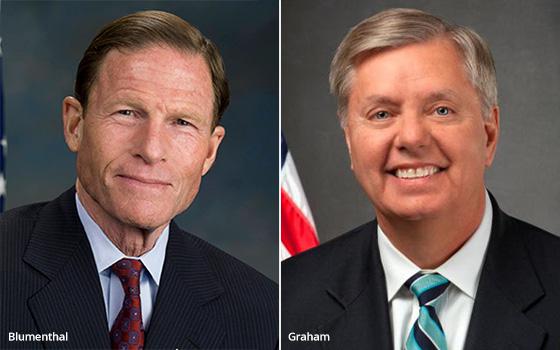 Online dating company Match will tell lawmakers Wednesday it supports “EARN IT” -- a bill that could discourage tech companies from encrypting their services.

The bipartisan bill, introduced last week by Sens. Lindsey Graham (R-South Carolina) and Richard Blumenthal (D-Connecticut), would carve out a new exception to Section 230 of the Communications Decency Act -- the law that immunizes online companies from civil lawsuits over content posted by users.

The EARN IT Act would require tech companies to follow a set of “best practices” in order to avoid civil lawsuits over material that sexually exploits children.

Those best practices have not yet been developed, but it's widely believed they will include a ban on end-to-end encryption.

Match Group CEO Shar Dubey stated Tuesday that the company supports the proposal “because it would modernize our laws and offer new rules of the road for technology companies to better protect children online and combat human trafficking.”

Dubey added: “The EARN It Act rightfully acknowledges that online safety is a societal issue that demands action from leaders in the social media and tech space and on Capitol Hill.”

An executive from Match -- which operates services including Match.com, Tinder, Hinge and OKCupid -- is also expected to testify in favor of the bill Wednesday at a Senate Judiciary Committee hearing. Representatives from the lobbying group Internet Association, Columbus School of Law and the National Center for Missing & Exploited Children, are also slated to testify at the hearing.

Match is so far the first major tech company to endorse the bill, which has been met with opposition by digital rights advocates and the Internet Association. One critic, the Center for Democracy & Technology, warned that any effort to undercut encryption “will put a lot of people at risk.”

“Policymakers and lawmakers need to be able to communicate securely without fear of eavesdropping, potentially by dangerous nation state attackers,” the group wrote. “For victims of domestic abuse, prosecutors working organized crime cases, and undercover police, their communications, which may contain information like their location and schedule, are incredibly sensitive and dangerous information.”

Other critics, including Santa Clara University law professor Eric Goldman, have noted that Section 230 already has an exception that allows the federal government to prosecute companies when users post material that violates federal laws.

Sen. Ron Wyden (D-Oregon), who authored Section 230, also weighed in against the proposal. “This terrible legislation is a Trojan horse to give Attorney General Barr and Donald Trump the power to control online speech and require government access to every aspect of Americans' lives,” he stated last week.