How Much Have YOU Heard Or Read About QAnon? 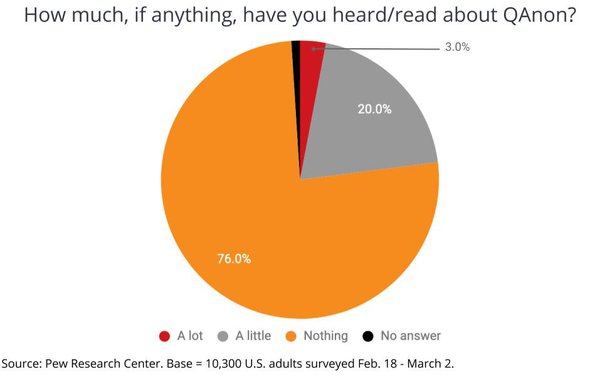 As far as dog whistles go, none may be as dangerous as the President of the United States sending secret signals to QAnon, a far-right conspiracy group espousing far-fetched radical theories like a ring of “deep state” pedophiles secretly plotting against the President and his supporters. But that’s what happened Sunday when the President and his social media manager Dan Scavino circulated a tweet depicting the President fiddling and featuring a QAnon tagline: “Nothing can stop what’s coming.”

The message is dangerous for a number of reasons, including the fact that QAnon increasingly is moving from the virtual depths of 4Chan and sub-Reddits to the “real world.” It’s also dangerous, because most Americans still are oblivious to it.

New research released this morning by the Pew Research Center finds only 23% of Americans have even heard a lot or a little about QAnon, even though a number of Republican officials and candidates openly support it, and individuals radicalized by the group have been committing violent acts.

Most recently, the group has begun promoting the theory that the Coronavirus is part of an anti-Trump conspiracy.

Remarkably, Republican voters surveyed by Pew said they are even less cognizant of QAnon than Democratic voters, reaffirming once again that democracy truly does die in the darkness. 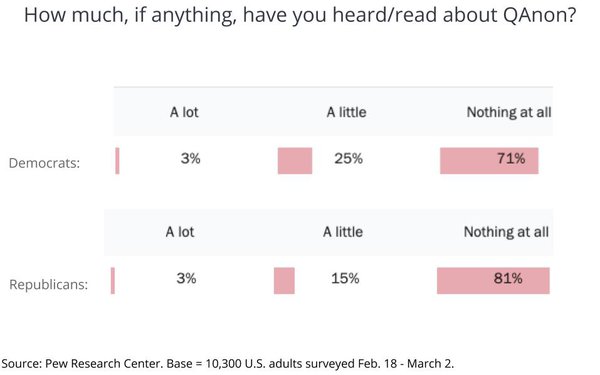 Who knows what this means, but it sounds good to me! https://t.co/rQVA4ER0PV

cmmr, politics, research
3 comments about "How Much Have YOU Heard Or Read About QAnon?".
Check to receive email when comments are posted.
Read more comments >
Next story loading