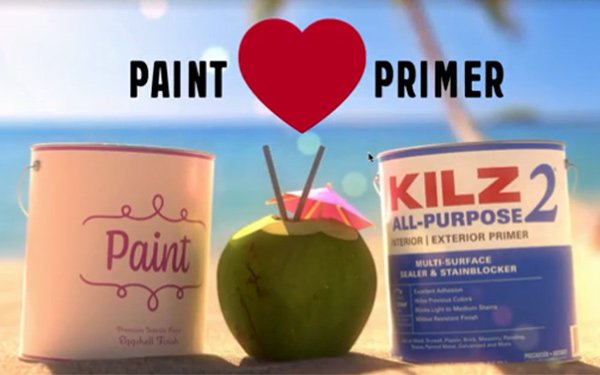 Kilz, the Behr-owned paint primer brand, kicked off a new campaign that included a takeover of ESPN.com Thursday, one of the most hectic sports news days of the year as the COVID-19 virus forced the cancellation and postponement of multiple pro leagues and collegiate events.

Created by Los Angeles ad agency, Arcana Academy, the new campaign encourages younger do-it-yourselfers to use primer before they paint. Ads chronicle a “love affair” between a can of paint and a can of primer.

A 30-second spot shows the “couple” finding each other on a dating app, then on to a first date, moving in together, getting married and taking a honeymoon all set to REO Speedwagon’s '80s hit, “Keep on Loving You.”

Digital and social ads, tagged “a match made in heaven,” show such outtakes as their dating-app connect and wedding (complete with the full line of Kilz products in the bridal party).

“Ultimately, we want people to make a simple association: primer and paint are better together,” said Lee Walters co-founder and executive creative director at Arcana Academy. “For this audience, you won’t connect if you aren’t novel and authentic. They can relate to app dating, getting married and buying houses for the first time, because that’s what they’re doing.”

The campaign builds on the “Every Project is Worth It” platform Arcana and Kilz launched last year that integrates video and banner ads to web pages that educate consumers on why primer produces better paint jobs, how to choose and apply primer, and what value that adds to you.

“Paint Loves Primer” will run on DV 360 and YouTube, while banners run across a wide range of online sites and social networks. Last year’s effort triggered the most site visits and “where to buy” interactions for Kilz in two years.