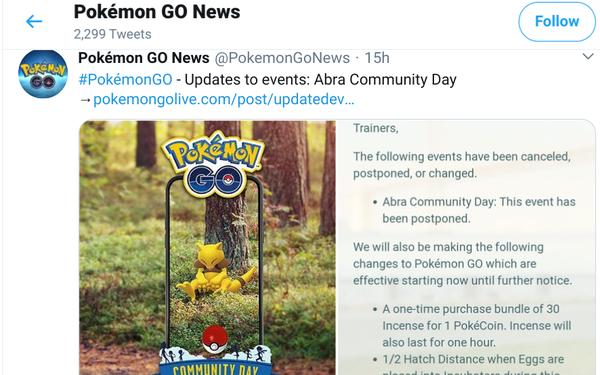 Remember how, in July 2016, the world was fascinated (and often annoyed) by the emergence of Pokémon  Go, as players poked around hither and yon to battle and capture virtual foes called Pokémon?

Well, for now, the coronavirus is going to force some changes in the game.

The developer, Niantic, says it’s “prioritizing updates to Pokémon Go features and experiences that can be enjoyed in individual settings.” There will soon be more habitats “so trainers can see more monsters without having to stray too far away from home,”  according to the game site, Polygon.

But Pokémon will also show up more “in the wild,” according to the developer, rather than in more crowded urban areas.

Restrictions like that recall the early days, when Pokémon  Go players were everywhere. Cambodia banned the game at a former Khmer Rouge genocide site when players showed up there. Iran has banned it, and the Pentagon has restricted its use due to security concerns. The memorial and burial site for President James A. Garfield has signs posted asking Pokémon Go players to let the man rest in peace.

And “safety tips” on the game website includes one that warns, “To make sure you and those around you are safe, do not play Pokémon  GO while riding a bike, driving a vehicle, operating heavy machinery, or doing anything else that requires your full attention.”

By the middle of 2018, Pokémon  Company’s president announced the mobile game had now surpassed 800 million downloads, so changes to the playing field are no small matter.

But unless you’re a player, the changes made to Pokémon  Go as a caution during the coronavirus pandemic, will sound like gibberish.  They’re designed to keep players safe and away from densely populated areas.

Pokémon Go is not the new-kid-on-the-block worldwide phenomenon it was a few years ago, but according to a year-in-review report SuperData, a Nielsen-owned provider of market intelligence on the gaming business, the game took in $1.4 billion in 2019, making it the sixth on its “Top Free To Play Games By Revenue” list.
And the British Academy of Film and Television Arts (BAFTA) recently nominated it for mobile game of the year, along with five other titles.