The Most Important 'Scape' The Ad Industry Will Ever Need, Trust Me 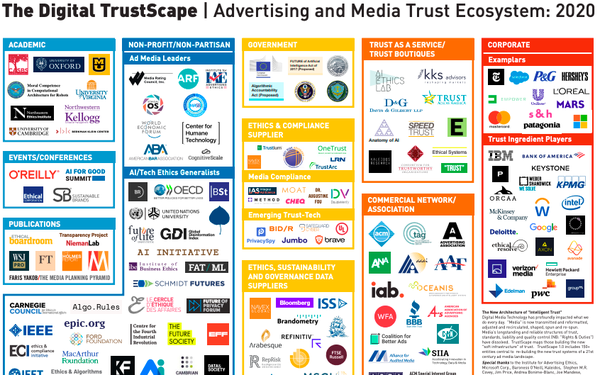 Advertising, media and technology industry "scapes" -- the kind of graphically organized charts delineating vital industry ecosystems popularized by investment banking firm Luma Partners -- may seem like they're a dime a dozen these days, but a new one created by an industry ethicist may be the most important one Madison Avenue will ever use.

The delineation (depicted above and clickable for downloading the full PDF) is version 1.0 of an ad industry "TrustScape," and was conceived by Andrew Susman and seeks to organize the major players who have trying to establish, or reestablish, trust in an industry that has increasingly shifted from common sense sustainable relationships to a variety of platforms, technologies, protocols and methods attempting to provide "transparency" in its place.

The result has been a cottage industry of industry middlemen, and one-stop transparency "solutions" designed to provide a proxy for underlying trust and accountability. Susman, a senior advisor to the American Advertising Federation's Institute for Advertising Ethics, says the TrustScape is intended to be a starting point and he welcomes suggestions for adding to it or modifying it over time so that industry practitioners have a common point of reference for discussing trust.

The following Q&A was conducted to explain how it evolved.

MediaPost: Why does the ad industry need a TrustScape?

Andrew Susman:  The intent is to lend some order and perspective. I did it first for myself, but thought it would have value for other interested parties involved in media trust and ethics.

The purpose was to develop a more nuanced understanding of who the key actors were across the spectrum.

It’s a framework and a work in progress. This is 1.0 and I welcome improvements. It’s evidence that the system of trust is completely broken and there’s confusion about what constitutes trust and there’s confusion and no distinction about what distinguishes transparency and trust. And the old systems for trust no longer work the way they used to and there is no quality control in place.

The irony is that we are operating in an age of transparency. And in this hyper-transparent world, we have more information on everything, but at the same time, trust in the ad industry has receded to an all-time low, if you look at opinion polls like Trust Across America and Edelman’s poll.

Transparency and trust are not the same thing.

We used to trust the media we did business with, because they had their own standards in place. The broadcast networks literally had “Standards & Practices.” But today, the discussion is lacking in the mechanics of trust.

MediaPost: You mean the kind of trust that existed in the broadcast network upfront, where billions of dollars would transact based on a handshake?

Susman: When my old [Studio One Networks] partner Bob Blackmore was head of sales at NBC and General Electric came in and bought them, the first thing the GE executives asked him was where were the contracts. He said, “What contracts?” There were no contracts, because it was all done on trust and it was done very efficiently and effectively. Imagine doing that with digital media today?

Trust has imploded in the ad industry today. If we had to point to evidence of that, just look at what happened with we saw one trade organization [the Association of National Advertisers] hiring detectives to investigate what their ad agencies were doing. And it’s the first time we’ve seen the government investigating it since the [1960s] Harris Commission.

MediaPost: Why is trust important?

There are trust dividends, plus it’s more fun to do business that way. In situations of low trust, costs go up and speed goes down and it’s a miserable affair for everyone.

Also, our industry in particular is magnified in society more than most other industries, and therefore we should feel more of a duty to make ours right. And yet our industry -- if you look at the professional practices around media and advertising and compare them to other industries like law, finance, accounting, medicine, etc., they all have very high standards of trust built around licenses, certifications, verification and codes of conduct. We have the least. We have a profession that is the leas tangible in terms of accountability and yet has some of the greatest societal impact. And that’s out of whack.

MediaPost: Why did you organize version 1.0 of the TrustScape the way you have?

Susman: In some part, I was inspired by the way the artificial intelligence industry is organizing itself. I started with an Excel spreadsheet and then I started categorizing it in order to see how these entities related to each other. The format was the result of the information and I learned as I went. It’s just a starting point, and I welcome suggestions for improving it.