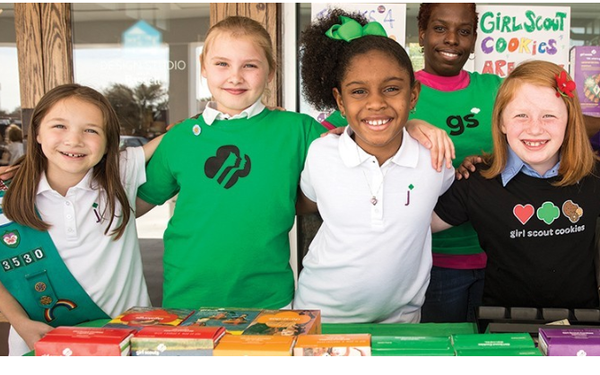 The Girl Scouts of USA on Monday said it “recommends” suspending Girl Scout cookie booths, the kind of displays girls and their parents have posted outside supermarkets and other places for decades, “due to the likelihood of interaction with large numbers of the public.”

The GSUSA blog says it recognizes stopping those sales “will create other challenges,” mainly what to do with all those cookies.

There are a lot of them. In a typical year, 1.2 million Girl Scouts sell over 200 million packages and raise over $800 million.

“Of particular concern for troops, parents and volunteers is the fact that they will face excess inventory of cookies they were planning to sell during upcoming booth sales,” the blog says.   “Please know that GSUSA will actively work in partnership with all councils, our bakers, and our national booth partners to determine how to best manage inventory impacted by this suspension so that it does not become a financial burden to our girls, parents or volunteers.”

There have been scattered references to curtailing the sale on social media and the social networking app called NextDoor. Various Girl Scout units in cities and states made their own decision until the more official call today.

The message adds, “We are also working in partnership with councils to build on the existing recommendations for creative approaches to recouping Cookie Program revenue.”

The scout group says,  “Based on WHO and CDC guidance, and bearing in mind official guidance around social distancing, GSUSA is recommending that councils immediately suspend all large in-person Girl Scout events, consistent with similar bans on large gatherings in many cities and states.”

The first cookies were homemade, and sold by an Oklahoma troop 103 years ago, in 1917. In 1933, an official history reports, girls in Philadelphia got the gas and electric company to sell the cookies when customers came to pay their bills. A year later, the Philadelphia girls got a commercial baker to make them. And in 1935, the New York council took the idea one marketing step further, branding them Girl Scout Cookies. The rest, of course, is history.

What to do about cookie sales has been preoccupying the organization for at least a week. On March 13, the day after the Girls Scouts celebrated their 107th birthday, Sylvia Acevedo, the CEO, created a video on Facebook explaining how the cookies figured into the growing crisis, and that selling efforts may need to wait.

“Now Girl Scout Cookies are delicious no matter when they’re sold,” she said, addressing the troops and their leaders.  “And the skills that you learn in the cookie sales program don’t change. In fact, pausing your sales, being creative about other ways to sell, tracking your inventory and being prepared to reach out to your customers at a later time are important skills.”

She also urged scouts to make sure they wash their hands for at least 20 seconds. “I have a handy tip for that," Acevedo noted. "It takes about 20 seconds to sing the first two stanzas of our famous Girls Scout song, ‘Make New Friends.’  So just sing that to that yourself, using lots of soap,  and you’re good to go."