In a survey conducted March 16-17 by CivicScience, 67% of U.S. adults (18 and over) said that they had not, in the past two weeks, subscribed to any new streaming video services due to the coronavirus.

However, 9% said that they had subscribed to new streamers, and 5% said they hadn't, but planned to do so soon.

Nearly a fifth of the 2,045 sample, which was weighted to reflect U.S. Census Bureau data for adults, said they don't use streaming services.

Which services are benefiting most?

While Netflix and Disney+ have seen relatively stagnant subscription numbers over the past several weeks, CivicScience’s ongoing tracking reported a rise in subscriptions to Hulu and Amazon Prime Video: 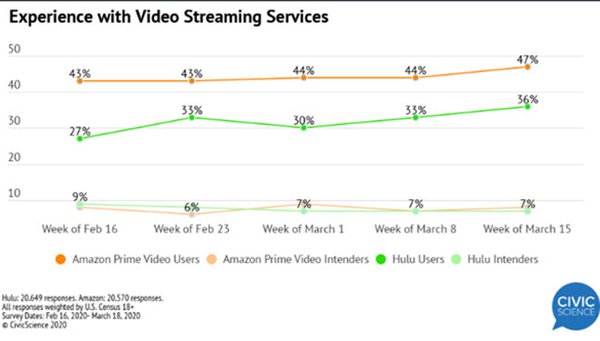