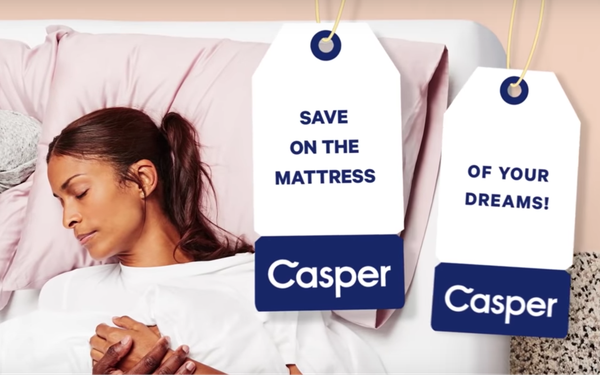 One D2C brand whose bright prospects are dimming: Casper mattress

It’s been a week of deep distress in nearly every pocket of the planet, and D2Cland is no exception. Along with alarming infection rates and scary spikes in COVID-19 deaths, markets have been rattled by utter upheaval in consumers.

Among the headlines? Airbnb racking up hundreds of millions in losses. Casper’s prospects are dimming. And even Peloton -- a brand seemingly invented for social distancing -- is struggling to find footing as people radically reinvent their behavior.

I’ll say something I don’t often say, especially when we’ve all spent so much time talking about the vulnerabilities of the elderly. But here goes: Sometimes, it’s good to be older.

Of course, D2C companies are staffed by people who remember these times, too. And for those led by millennials, 2008’s meltdown left a profound impact. Many still struggle with enormous student loans from that era -- some because the money their parents hoped to use for tuition evaporated with the fall of Lehman Brothers. And they had to scrap their way through years of the most punishing hiring markets in recent memory, with unemployment often cresting above 10%.

I don’t envy them the crash course they’re about to get in crisis management, as companies and as leaders.

Spawned in an overheated bull market and a period of generous consumer spending, many D2C brands haven’t experienced anything close to a downturn, let alone a recession.

If managing through wild upswings is exhilarating and exhausting, it’s soul-crushing during periods of contraction. Ask anyone who has ever had to fire people who have done nothing wrong, and they’ll back me up -- especially when the crisis may require cutting good people loose when some government officials think unemployment may soar to 20%.

Things do look bad. As recently as a year ago, for example, Casper was the envy of the category for its pioneering approach to mattresses. But its IPO was already considered a disappointment before the market crashed. And its results last week didn’t cheer anyone up.

The company told investors to expect results next quarter significantly below expectations -- a loss of $30 million instead of in the neighborhood of $14 million. “With post-IPO cash of $156 million and no additional significant liquidity,”  this might lead the company to “further tap its additional, high-interest subordinated credit line (if accessible), or raise capital through alternative methods,” writes Seth Basham, an analyst who follows the company for Wedbush Securities.

On top of that, the demand outlook is “highly uncertain,” according to Basham. At a time when people feel worried about making their rent or mortgage, a comfier mattress won’t be a high priority.

And Peloton, a brand one might have expected to be one of the few benefiting from gyms closing around the country, has had to shifts its delivery policies. It’s also had to given up the audiences for its live classes, one of its signature methods of customer engagement.

The privately held Airbnb’s woes are far larger, of course -- as large as the entire travel industry. Its leaders are going to have dig deep to find an entirely different level of grit amid plunging revenues and a backlash from frustrated hosts. The company had planned to make a public offering this year, a move that could prove impossible unless markets stabilize.

“This moment shall pass,” says Brian Chemsky, Airbnb CEO, in a statement to The Wall Street Journal. That’s also a direct quote from my mom at a moment when I seemed permanently unemployed -- and probably everybody’s mom, at some point. It’s often the only thing to hang onto.

It’s all cyclical. What goes down often does come back up. The lockdown will pass. Consumers will become less fearful and return to shopping -- albeit more cautiously. Some D2C brands will continue to have a steady appeal -- and already, some have benefited from ecommerce strengths and social distancing trends.

But for now, the party of big investor cash raises and soaring valuations is facing its own kind of quarantine.