Publisher data and analytics company Chartbeat examined about 4,000 websites to track the COVID-19 virus’ effect on the news and engagement.

As of this week, the topic is receiving one-third of all pageviews across Chartbeat sites.

Chartbeat’s network of publishers includes sites from around the world, such as The Washington Post, The New York Times, The Atlantic, CNN, Le Monde and The Telegraph.

The study was based on data that sites allowed the company to use for research purposes.

Also, 35% of total engaged time is dedicated to covering COVID-19 — up 118% from the prior week — with an average engaged time about five seconds higher than the average article.

Search and social (including dark social) traffic to COVID-19 articles are mirroring each other, with social driving slightly more traffic — an unusual pattern, according to Chartbeat’s study.

Google Search has shown the most growth, with more than 500 million daily pageviews from March 16 to March 19.

After Google, the top traffic referrers were Twitter, Bing, Flipboard, Smart News and Yahoo on March 18 across the Chartbeat network. Most have seen a sharp increase in traffic since March 8. 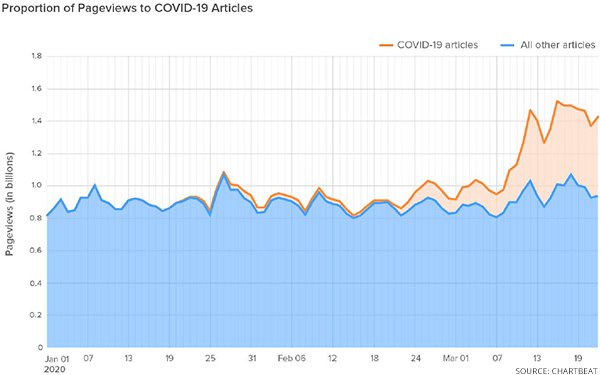