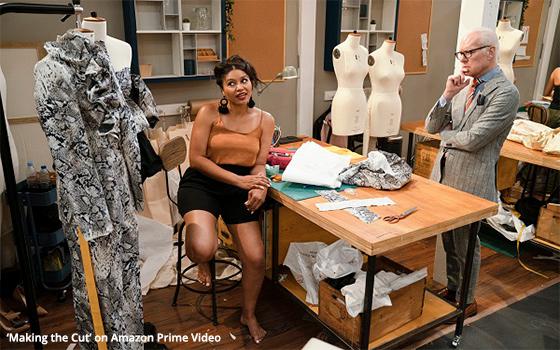 One of the first things you notice that distinguishes the new Heidi Klum-Tim Gunn fashion competition show on Amazon from their old show, “Project Runway,” is the acute absence of in-show sponsorships and product placements.

A number of the reality-competition shows that emerged in the mid-’00s were full of these, and “Project Runway” was one of the most conspicuous (along with “The Apprentice,” if memory serves).

But Klum and Gunn’s new show -- titled “Making the Cut” and premiering Friday on Amazon Prime Video -- has none of them. Well, none of them except for Amazon itself.

The brand is mentioned often in the first episode of this Amazon series. Access to Amazon’s worldwide sales and marketing apparatus is one of the prizes in the competition. The winner of each week’s fashion face-off will have his or her creations sold via a new Amazon platform -- the Making the Cut Store.

You might say that this new show is a subscription-streaming adaptation of “Project Runway.” As such, the new “Making the Cut” simply does not need marketing partnerships in the manner of a commercially supported, basic cable series such as “Project Runway.”

That show is still running, currently back on Bravo, which was its original home until a sojourn of several years on Lifetime. Christian Soriano, a “Project Runway” winner, and model Karlie Kloss have assumed the roles formerly played by Tim Gunn and Heidi Klum, respectively.

Gunn and Klum did not stay with “Project Runway” when it moved back to Bravo. But here they are again, having apparently accepted what was probably a very generous offer from deep-pocketed Amazon to make a similar show.

Episode One of “Making the Cut” -- which the TV Blog previewed this week -- has Gunn, Klum and their 12 contestants flying from New York to Paris to make creations that will be seen in a special runway fashion show staged in a tent near the Eiffel Tower.

In “Project Runway,” this kind of runway exposure has traditionally been saved until the season finale, when the finalists show their collections at New York’s Fashion Week.

In “Making the Cut,” a Paris runway show in the very first episode seems premature as roughly half the contestants make and present garments that would have gotten them eliminated from the competition in the early rounds on “Project Runway.”

The flop outfits on view in Episode One of “Making the Cut” come as a surprise, however, because these contestants are introduced and described, supposedly, as successful designers on the rise.

They already have their own brands, and some of them say they have already shown their lines in high-profile environments such as New York’s Fashion Week. And yet in the first episode of “Making the Cuts,” some of them come across like amateurs.

Just like in the old “Project Runway,” Gunn is mentor to the designers and Klum is chief judge. In this new show, the elimination seen in the first episode seems colder than any of the ejections seen on “Project Runway,” as if Heidi has somehow become meaner.

When she is told the news that she is out, the contestant who is ejected by Heidi in Episode One of “Making the Cut” looks like someone just walked up and sucker-punched her in the gut.

Oh, well -- in fashion, one day you’re in and the next day you’re out. In any case, that’s what Heidi used to say on “Project Runway” just before she apologetically informed the episode’s loser that he or she was out of the running, and then sent them off with a friendly “Auf wiedersehen!”

Now her catchphrase, delivered coldly, is “You’re not making the cut.” And she doesn’t even say “Auf wiedersehen.”