Syfy Space Series Boldly Goes Where Others Have Gone Before 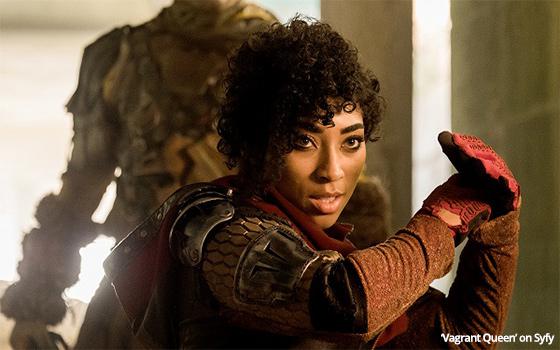 The appetite for “Star Wars”-style outer space shoot-’em-ups apparently knows no limits because here comes another one.

This one is called “Vagrant Queen” and it has the heroine of the title roaming a far-off galaxy in search of valuable items that she either finds or steals and then sells to shady characters that she encounters on various rogue planets.

In the premiere episode of this show -- which starts on Syfy this Friday -- the action takes place primarily on one of these lawless orbs.

Among the settings is a saloon filled with a wide variety of interstellar, bipedal creatures -- a place that was likely inspired by the first one of these that was seen in the very first “Star Wars” movie released in 1977.

That was a long time ago -- 43 years -- so it stands to reason that this TV show's use of the original “Star Wars” movie as source material will be meaningless to -- what -- half the population alive today?

This new show adapted from a series of comic books is certainly not aimed at anyone who was alive in the 1970s who first encountered “Star Wars” in an actual movie theater (and only there).

An older person naturally looks skeptically at this kind of action drama and then asks himself a series of irrelevant questions (silently, of course), including: Who built all of these space ships? Where did the money come from? How did all these people learn to fly them? How are they able to flit from planet to planet in the time it takes us to fly from New York to Chicago? And most crucially: Where's the science behind all this?

If you are the type of person who has these thoughts when watching content like this, then clearly this is not for you.

Perhaps like others your age, you have already seen enough bumpy-headed aliens on screens both large and small to last a lifetime.

In fact, two such characters appear in the very first sequence of “Vagrant Queen.” They come upon our heroine just as she has found an item she is keen on keeping. Not surprisingly, they then attempt to force her to part with it.

Since this is the first scene of the show, and she is the show's star character, how do you think this confrontation turns out? Score: Vagrant Queen 2, bumpy-headed aliens 0.

The young queen of the title is played with panache and more than sufficient fierceness by Adriyan Rae (pictured above). It turns out that she is literally a queen, but one without a kingdom for the time being.

How she might be restored to her rightful throne to reign again is the underlying story that is supposed to sustain the series. In the meantime, there are enough shootouts, perils and narrow escapes to satisfy fans of these kinds of shows, and vex the rest of us.