Publishers Team With One Day University On Digital Events 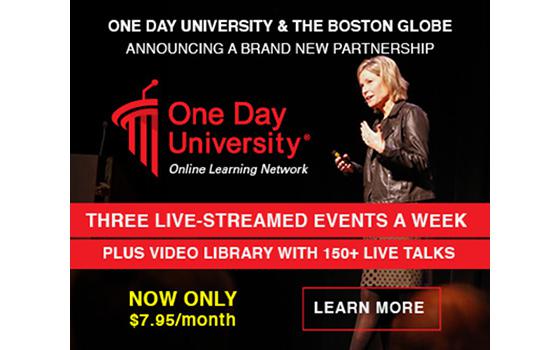 One Day University is partnering with over 40 publishers to host its educational events online, after the live lectures had to be postponed as a result of COVID-19.

As of April 1, 44 publishers had joined the new program, ranging from TheBoston Globe to The Seattle Times,The Philadelphia Inquirer to the Los Angeles Times and The Cleveland Plain Dealer to The Oregonian.

“This is an opportunity for newspapers to offer something to their readers and make some money,” president-founder of One Day University, Steven Schragis, told Publishers Daily.

One Day University hosts live lectures across the country on a wide range of topics. Attendees pay to be part of a day of learning.

For the past five years, ODU has created digital and print ads and promotional emails to send to its publisher partners in the city where a live event will be held. The marketing materials are then distributed by the publishers to their readers and subscribers in the manner they choose. Publishers get a 50/50 revenue split with One Day University.

“We look to the newspapers to do the marketing,” Schragis said. ODU works with a network of 61 publishers.

On Saturday, April 4, ODU will live stream these lectures online.  It is part of a new subscription plan, called One Day University Online Learning.

Members can pay $7.95 a month for access to the live streams, as well as a video library of 150+ previously recorded lectures.

While the “cost is much less” than the in-person events put on by ODU, Schragis expects the number of people tuning in online "will be much bigger." “We need at least 300 people to break even,” he noted.

Every three days, ODU will livestream a new lecture.

“It will allow us to reach young people, too,” Schragis said. The average age of the live lecture attendee is about 59.

A typical live ODU event features three professors, who each hold a one-hour lecture. About 500-800 people would attend, with tickets costing $119 a piece, Schragis said. There are usually 70 to 80 events in the spring season, but given the pandemic,  “everything got pushed to the fall."

ODU can call on its network of close to 200 professors from 90 different colleges and universities to be a part of the new digital membership program, Schragis said. ODU has reached 90,000 adult students, he added.

One Day University selects the “most interesting” professors on campuses across the U.S., from fields of study that include history, politics, music, art, psychology, philosophy, business, theater and literature, among others.

For example, this Saturday's lecture topics include “The Power of Literature in Times of Crisis” to “The Flu Epidemic of 1918: Separating Fact from Fiction,” with professors from Amherst College, Bard College, the University of Texas and Chapman University.

On April 7, topics will include, in part, “What Would Leonardo da Vinci be doing Right Now?” and “Abraham Lincoln in Crisis,” with professors from Yale University, the University of Pennsylvania, Rutgers University and Columbia University.

ODU has been planning a digital expansion and membership plan for a while now, but the COVID-19 virus made holding live events dangerous, thus accelerating the launch of One Day University Online Learning.

In the last few years, ODU began filming its events once a month, available to stream online, but it “was not a major part of the business,” Schragis said, making up just 3% of overall revenue. Live streams began eight-to-nine months ago.

“Given the [current] situation, we knew we had to ramp up for real,” Schragis said.